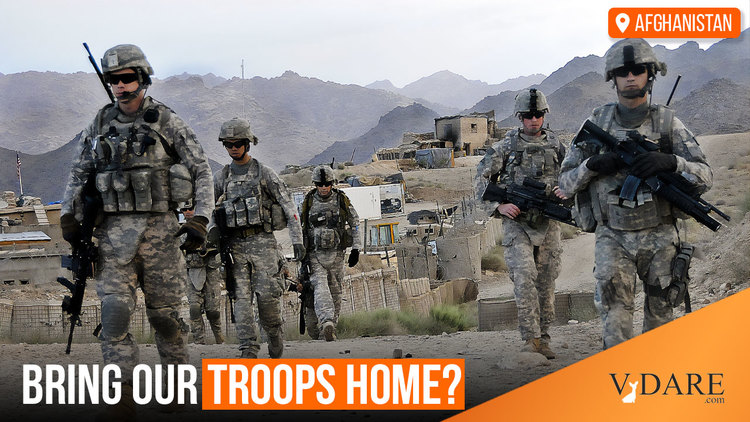 The clock is ticking towards May 1st, by which time President Biden has to poop or get off the pot—the Afghanistan pot, that is.

I have reported at length on the dilemma facing the administration. Trump negotiated an agreement with the Taliban a year ago to withdraw our remaining troops from the country by May this year. The number of those troops was given as 2,500.

As I pointed out then, it's a real dilemma for the Biden administration. If we pull out as per the agreement, our puppet government in Afghanistan will quickly collapse. The Taliban will take over; the hundreds of billions of dollars and thousands of lives we've given to the war in Afghanistan will all have been for nothing.

If we stay, however, we are going to need to send more troops there, presumably for another twenty years of futility. It looks in fact as though Congress will insist on our committing more troops.

Now we learn from the New York Times, March 14th, that we've been misled about the number of troops we currently have there. It's not 2,500, it's 3,500. Quote from that New York Times story, quote:

Having more troops in a country than the Defense Department officially acknowledges is common practice. From Syria to Yemen to Mali, the United States often details military troops to the CIA or other agencies, declares that information "classified" and refuses to publicly acknowledge their presence.

So maybe 3,500 isn't the true number, either. Perhaps it's 4,500, or 5,500. Who knows? Well, the Defense Department knows. It's none of your business, though, Joe Citizen. Keep your nose out of things that don't concern you.

Report could undermine confidence in future talks as other parties will have concerns our side won't be honest negotiating partner (since isn't transparent even with its own citizens) & thus will feel they could be cheated. Deepens cynicism @ home too.https://t.co/KT7oZzjUHd