The employment outlook for most Americans looks pretty bad, but for those over 50 it is downright grim. Businesses just don't like to hire older workers, even though they are just as capable as anyone else, and often more so.

The one thing about Obamacare (with the eventual endgame of single-payer) that I thought might be beneficial was removing healthcare costs from the employer. That would disincentivize laying off older workers who cost more for health coverage and might make them more employable.

Anyway, it's clear that age discrimination laws don't work, because employers can always make up some excuse. As long as a business doesn't fire everyone over 50 on the same day, there's no case to be made. There is not much that can be done, except the overall reduction of excess workers:Â the best way to improve the prospects of older workers would be for Washington to shut down the firehose of legal immigration (1.5 million workers annually) and apply enforcement to illegal immigration.

Before mass immigration, American workers could easily pick up a part-time blue-collar job during hard times and get by until the economy improved. But both the percentage and absolute numbers of foreign workers has been going up since 1970, as shown in the chart below. There is a glut of potential employees generally, and one of the groups most affected by a flooded labor market has been older workers.

Sadly, there's not much attention given at all to the bleak job prospects older workers face, much less the immigration connection.

Kathleen Harwell can't imagine what life on the streets would be like for a 59-year-old woman with diabetes and high blood pressure, but she's afraid she'll soon find out.

After nearly two years without work and no luck finding a new job, the Laurel resident is on the brink of homelessness. She has run out of savings and unemployment benefits. She's too young for Social Security. And she's not the only one in this frightening fix. 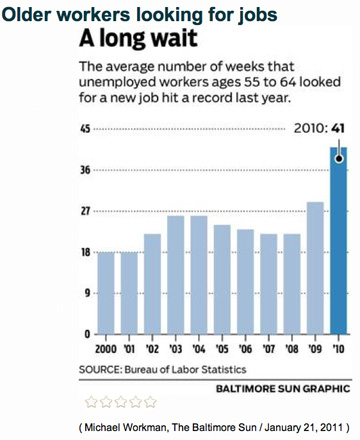 A burgeoning group of older, jobless people - here and nationwide - have found everything they worked for over the decades snatched away by the sharp downturn and slow recovery. Laid-off workers in their 50s, 60s and older are facing grim prospects of finding a new job, the worst for any age group in at least five recessions, at a time when hardly anyone is finding re-employment easy or quick.

That has left these residents in a precarious state.

Baltimore's homeless-services agencies saw a 15 percent jump last year in the number of clients ages 50 and up. Calls for help to the United Way of Central Maryland's 211 line rose almost 9 percent among those older than 45 last year, compared with a 1 percent increase among all ages. And food pantries served by the Maryland Food Bank have noticed an influx of baby boomers, including some who were donors before job loss struck.

The Community Action Council of Howard County, which helps low-income residents of the affluent jurisdiction, is on track to see about 2,000 people ages 45-plus this fiscal year - up 50 percent from a year earlier. More older, out-of-work professionals are asking for the group's help because they have nowhere else to turn.

"They are not traditionally individuals who seek social-services assistance," said Bita Dayhoff, president of the Community Action Council. "So they wait until their situation is very challenging, and they're truly struggling, before they come to us. That's an emotional side of the impact of the recession that we see on a day-to-day basis in this age category as well, because they're really, truly surprised by the economic status they find themselves in."

Older workers aren't more likely to be laid off - job seniority helps protect them. But once out of work, the odds are against them. And many worry they are being shut out of the job market because of their age.

Nationwide, the average unemployed worker age 55 or older looked for a job without success for 10 months last year, the longest stretch on record. Also, age-discrimination complaints to the U.S. Equal Employment Opportunity Commission spiked when the recession hit, jumping from 19,000 to more than 24,000 in fiscal 2008, and have remained at an elevated level ever since.

The out-of-work predicament only compounds with time, according to labor experts. "The longer you're unemployed, the harder it is to find a job," said Richard W. Johnson, a senior fellow at the Urban Institute.

"Workers 55 and older who are out of work may never work again," he said.

Johnson found that only a quarter of workers age 50 to 61 who lost jobs between the middle of 2008 and end of 2009 were re-employed within a year. For those 62 and up, the results were even worse, with 18 percent landing a new job within a year.

"We are witnessing the birth of a new class - the involuntarily retired," the authors wrote.

This comes as nest eggs are smaller, with 401(k) retirement plans still dented by the 2008 and early 2009 dive in stock values. More than half of workers age 55-plus intend to keep working until at least 66 or never retire at all, according to a 2010 survey by the Employee Benefit Research Institute. A decade earlier, just over a quarter of people in that age bracket said the same.

An earlier-than-planned end to work can mean a hand-to-mouth retirement. Those forced by economic circumstances to start collecting Social Security at 62, the minimum age, get just three-quarters of the monthly payment they would receive at the full retirement age, currently 66.

Such pressures have turned minimum-wage, part-time jobs in a federally subsidized employment program for the 55-plus crowd into a hot commodity. Senior Service America, which oversees the program in much of Maryland and in 15 other states, is seeing longer waiting lists.

Owings Mills resident Linda C. Wainwright, 58, got part-time work through the Senior Community Service Employment Program, helping other participants in Baltimore County with job leads. Her own job search had turned up nothing else in 2009, and her pension was too small to cover the bills.

"My husband had passed away, so it got kind of rough. Not kind of - it was rough," Wainwright said. Twenty hours a week at minimum wage isn't a lot of money, but it's a "lifesaver" while she tries to land a full-time position.

Younger workers have been hard-hit by the recession, too, but at least they have more time to try to recover financially before retirement. And many have a safety net unavailable to most people in their 50s and 60s.

"They've got the option to go home and live with Mom and Dad, whereas the seniors are between a rock and a hard place," said Joanne E. Williams, director of the Baltimore County Department of Aging.

Harwell, the Laurel resident, said she has no family she can turn to. Her parents are dead; she's childless. Two sisters are still living, but they're struggling too and would not be able to take her in, she said.

She calculates that she has applied for close to 500 jobs since losing her position as an administrative assistant in an April 2009 layoff. She landed a handful of interviews but received no offers. The breadth of competition is daunting: While interviewing for one position in October, she was told that 600 people had applied for that single job.

She had no intention of retiring at all, let alone now. "I figured I'd work until I dropped," said Harwell.

Now, with nothing but a $232-a-month pension from a previous employer that isn't enough to cover her groceries and prescriptions, she said she could be evicted at the end of the month. She owns her manufactured home but can no longer pay the rent on the land beneath it.

The management of her community warned her in a letter that it planned to auction off her home to pay for the $2,100 that's past due if she didn't pay up by last Tuesday. She couldn't. "I'm out of luck unless a miracle happens," she said the day afterward.

Charities she contacted said she wasn't eligible for their help. In desperation, Harwell filled out an application for social-services assistance this month. She was quickly approved for food stamps and is waiting to hear what else she qualifies for. But Medicaid may be the only other government aid to which she's entitled.

When asked what she would do if neither a job nor substantive assistance materializes soon, she said in a near-whisper: "I have no earthly idea. I'm at a total and complete loss."

For some older job seekers, the fear that their age is a detriment is ever-present. Some also worry that their years of experience might actually work against them, as prospective employers assume they would require a higher salary.

Eve Prietz, 54, an Abingdon attorney who was laid off from a Baltimore law firm three years ago, said she applied for Justice Department jobs across the country and found the responses telling.

"All I kept getting was, ”You have impressive credentials but you're not exactly what we're looking for,'" she said. "And I fit all of the criteria they put in their job announcements."

Prietz, not wanting to limit herself to her field, took a job selling cars in 2008. But she quickly found she had no knack for it. For lack of any alternatives, she recently started an all-commission position that requires her to sweet-talk her way into businesses and convince employees that they should spend money on supplemental insurance. She'll make money only if people purchase policies.

What she wants, what she desperately needs, is a job with a regular paycheck.

Assuming she ever can retire. Her savings are long gone. Prietz, who adopted her 15-year-old son from Russia a decade ago to give him a better life, is heartsick that she now doesn't have the money to pay for daily necessities, let alone to send him to college.

Right now she and her son are living on food stamps. Her lender seems to have hit the pause button on foreclosure after starting court proceedings last year, but she knows it's only a matter of time before the sheriff arrives to show them out.

It doesn't surprise her to hear that homeless shelters are seeing the number of people in her age group swell. The job market seems no better to her now than it did when she first started looking, just as the recession was setting in.

"I'm willing to work. I can start tomorrow," Prietz said. "And there are a lot more people out there like me."