Jobs Americans WOULD Do: McDonald's Gets One Million Job Applications on One Day 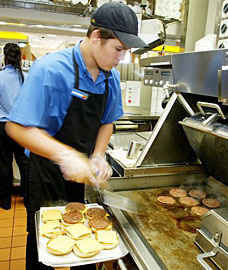 On April 19, the popular restaurant chain held a widely publicized employment day across the country which drew large crowds. Now the figures are in, and the McDonald's company reports that more than one million job applications were received that day.

What does that tell us about the state of employment in America? Clearly many people are desperate for any kind of job, even though the Washington suits say employment is getting better. (Watch for 8 percent unemployment to become the new normal in time for the 2012 election.)

Meanwhile, the President speaks often of his desire for comprehensive amnesty, which would transform millions of illegal aliens into legal workers to compete with citizens. Furthermore, the amnestied would later become grateful Democrat voters, the White House realistically hopes.

McDonald's and its franchisees hired 62,000 people in the U.S. after receiving more than one million applications, the Oak Brook, Illinois-based company said today in an e-mailed statement. Previously, it said it planned to hire 50,000.

The April 19 national hiring day was the company's first, said Danya Proud, a McDonald's spokeswoman. She declined to disclose how many of the jobs were full- versus part-time. McDonald's employed 400,000 workers worldwide at company-owned stores at the end of 2010, according to a company filing.

The number of applications for unemployment benefits in the U.S. rose last week, a sign that progress in the labor market may be fading. Jobless claims increased by 25,000 to 429,000 in the week ended April 23, the most in three months, according to data from the Labor Department in Washington today.

Earlier this month, McDonald's said sales at stores open at least 13 months climbed 2.9 percent in the U.S. after it attracted more diners with items such as beverages and the Chipotle BBQ Bacon Angus burger. The fast-food chain has about 14,000 stores in the U.S. and more than 18,000 abroad. About 80 percent of all McDonald's stores are franchised.