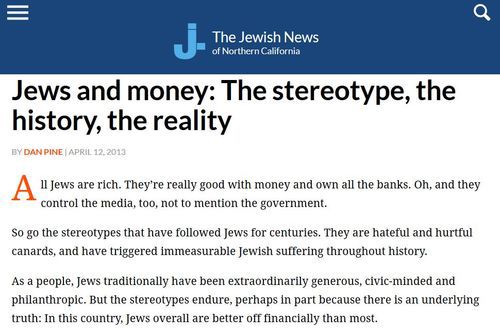 JEWISH NEWS OF NORTHERN CALIFORNIA: "Jews and Money: The Stereotype, the History, the Reality"

With the Establishment media up in arms over Muslim Congresswoman Ilhan Omar referencing the forbidden fact of Jewish wealth, it’s worth reading this old article in the Jewish News of Northern California:

All Jews are rich. They’re really good with money and own all the banks. Oh, and they control the media, too, not to mention the government.

So go the stereotypes that have followed Jews for centuries. They are hateful and hurtful canards, and have triggered immeasurable Jewish suffering throughout history.

As a people, Jews traditionally have been extraordinarily generous, civic-minded and philanthropic. But the stereotypes endure, perhaps in part because there is an underlying truth: In this country, Jews overall are better off financially than most.

So what’s up with Jews and money? It’s a complicated question, and for the most part the collective Jewish community has avoided discussing it.

There is a tacit taboo on talking about the relationships connecting Jews and wealth, power and influence. It pushes buttons for some, and generally is not mentioned in polite society.

That is, until now. The Jewish Community Center of San Francisco is hosting “Loaded: Jews & Money,” a series of events, lectures and discussions that touch on various aspects of the subject. The series, which runs through May, is the latest of the Manovill Conversations, sponsored by the Laszlo N. Tauber Family Foundation.

Organizers know the topic might make some people uncomfortable. They say, bring it on.

“It’s a sensitive, emotional arena, and brings out all kinds of reactions,” said Barbara Lane, the JCC’s director of Arts & Ideas. “We wanted an environment to discuss some volatile issues in a reasoned and intelligent way.”

The numbers are telling, though they aren’t the whole story. A 2008 Pew Forum Institute study found that Jews are the nation’s wealthiest religious group, with 46 percent earning $100,000 or more a year, compared with 18 percent of the overall population.

As for mega-wealth, the most recent Forbes list of the 400 richest Americans included nearly 100 Jewish billionaires — a striking statistic for a group that represents less than 2 percent of the population. Then again, financial criminals such as Bernie Madoff and Jack Abramoff embarrassed many in the Jewish community.

It adds up to plenty of fodder for the JCC series. Panelists and lecturers include Rabbi David Wolpe, Slate journalist Matt Yglesias, writer and essayist Daphne Merkin, filmmaker Lewis Cohen and a certain former New York governor who built a reputation for prosecuting Wall Street profiteers — some of them Jews. …

One of the series’ lecturers who will speak to such historical stereotypes is scholar Jerry Muller, author of “Capitalism and the Jews.” Muller, a professor of economic history at Catholic University in Washington, D.C., will discuss his book on May 7.

He thinks the time is right for a series like this, even though its subject may make audience members squirm.

“Jewish wealth is a stereotype,” Muller said, “but in almost every society in which Jews have been granted a modicum of equal legal rights, even if there was social and religious discrimination, they tended to do disproportionately well economically. In central and western Europe, and eventually the United States, Jews were the wealthiest group on average by a wide margin.”

He also busts the myth that the ghettoized Jews of medieval Europe languished in poverty.