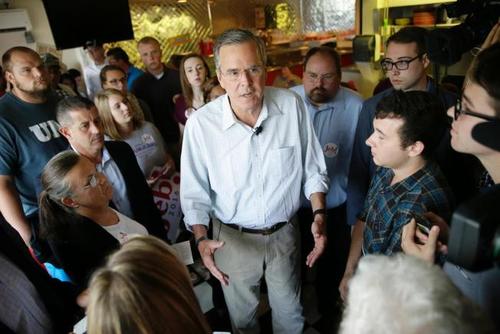 Jeb Condemns Multiculturalism By Redefining It

Can this really be true? Could Jeb Bush be renouncing multiculturalism?

Yes, but only by redefining the term. From the AP:

Republican presidential candidate Jeb Bush said Tuesday that multiculturalism is bad for the United States, adding that immigrants who close themselves off from American culture deny themselves access to economic rewards. The former governor of Florida, who speaks fluent Spanish and often touts his success winning Latino votes in a party that badly needs them, addressed the issue in a packed northern Iowa diner as he met people in the crowd.

A young woman approached the candidate and asked how the federal government could help refugees better incorporate into U.S. society. "We should not have a multicultural society," Bush said, before beginning a longer explanation of his views of what comprises culture in the U.S. "When you create pockets of isolation — and in some places the process of assimilation has been retarded because they've slowed down — it's wrong," he added. "It limits people's aspirations."

Bush's remarks appeared to conflict with the way he has presented himself throughout the campaign and hew toward other GOP presidential hopefuls who are hoping to appeal to the party's core supporters.

Don't worry, Jeb is going to explain this one away....

But Bush said later he viewed multiculturalism as not aspiring to an American ideal. "You have to have people assimilate into society. But that doesn't mean we have a monolithic, homogeneous population. To the contrary," he told The Associated Press before headlining a legislative fundraiser in Cedar Rapids. "The power of America is a set of shared values with a very diverse population embracing it."