Japan May Provide a Snapshot of the Automated Future

Does Japan offer a preview of the near future of more robots? Perhaps, since the nation has an aging population, and it has rejected immigration as a source of labor, choosing automation to pick up the slack.

The Atlantic magazine takes a look in a new article that visits a robot restaurant in a robot hotel that is part of a Dutch-themed amusement park near Nagasaki.

Behold the robot pancake maker in the Henn-na Hotel. 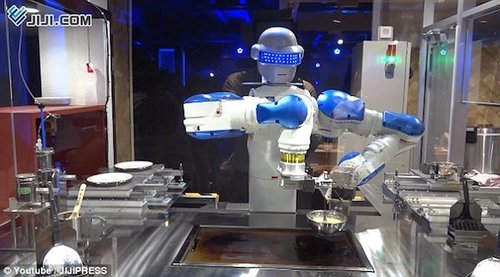 The whole thing looks pretty gimmicky, but the Japanese seem to like their robot technology with bells and whistles.

An earlier report on the business noted that a hotel of similar size requires a staff of 35, but the Henn-na “gets by with less than seven staff members and the goal is to get down to a staff of just three humans.”

Hotel work is low-skilled and much of it can be done by robots already. We should consider these facts in an American context where immigrants make up much of the hotel workforce in diverse cities. We already see robot bellhops being introduced and management will be looking for more automation as customers appear willing to accept it.

Fast food automation is similarly coming on strong in the US, with robotic burger flippers, pizza prep and cappuccino brewer.

So the need for low-skilled immigrant workers is rapidly disappearing. The RAISE Act which gradually cuts immigration in half is a decent start but doesn’t go nearly far enough given the automated future. If the Oxford scholars are right and nearly half of American jobs were vulnerable to machine or software replacement by 2033, then we won’t need any immigrants because the machines will be cheaper. 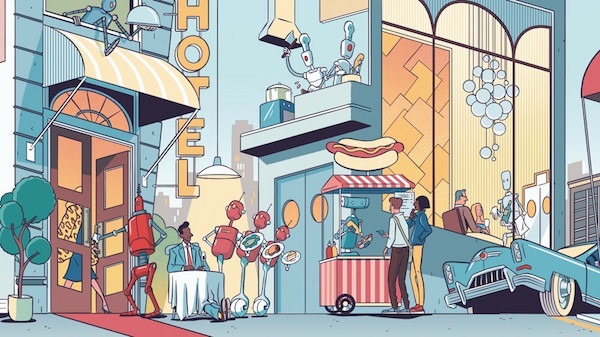 Visitors to Henn-na, a restaurant outside Nagasaki, Japan, are greeted by a peculiar sight: their food being prepared by a row of humanoid robots that bear a passing resemblance to the Terminator. The “head chef,” incongruously named Andrew, specializes in okonomiyaki, a Japanese pancake. Using his two long arms, he stirs batter in a metal bowl, then pours it onto a hot grill. While he waits for the batter to cook, he talks cheerily in Japanese about how much he enjoys his job. His robot colleagues, meanwhile, fry donuts, layer soft-serve ice cream into cones, and mix drinks. One made me a gin and tonic.

H.I.S., the company that runs the restaurant, as well as a nearby hotel where robots check guests into their rooms and help with their luggage, turned to automation partly out of necessity. Japan’s population is shrinking, and its economy is booming; the unemployment rate is currently an unprecedented 2.8 percent. “Using robots makes a lot of sense in a country like Japan, where it’s hard to find employees,” CEO Hideo Sawada told me.

Sawada speculates that 70 percent of the jobs at Japan’s hotels will be automated in the next five years. “It takes about a year to two years to get your money back,” he said. “But since you can work them 24 hours a day, and they don’t need vacation, eventually it’s more cost-efficient to use the robot.”

This may seem like a vision of the future best suited—perhaps only suited—to Japan. But according to Michael Chui, a partner at the McKinsey Global Institute, many tasks in the food-service and accommodation industry are exactly the kind that are easily automated. Chui’s latest research estimates that 54 percent of the tasks workers perform in American restaurants and hotels could be automated using currently available technologies—making it the fourth-most-automatable sector in the U.S.

The robots, in fact, are already here. Chowbotics, a company in Redwood City, California, manufactures Sally, a boxy robot that prepares salads ordered on a touch screen. At a Palo Alto café, I watched as she deposited lettuce, corn, barley, and a few inadvertently crushed cherry tomatoes into a bowl. Botlr, a robot butler, now brings guests extra towels and toiletries in dozens of hotels around the country. I saw one at the Aloft Cupertino.

Ostensibly, this is worrying. America’s economy isn’t humming along nearly as smoothly as Japan’s, and one of the few bright spots in recent years has been employment in restaurants and hotels, which have added more jobs than almost any other sector. That growth, in fact, has helped dull the blow that automation has delivered to other industries. The food-service and accommodation sector now employs 13.7 million Americans, up 38 percent since 2000. Since 2013, it has accounted for more jobs than manufacturing.

These new positions once seemed safe from the robot hordes because they required a human touch in a way that manufacturing or mining jobs did not. When ordering a coffee or checking into a hotel, human beings want to interact with other human beings—or so we thought. The companies bringing robots into the service sector are betting that we’ll be happy to trade our relationship with the chipper barista or knowledgeable front-desk clerk for greater efficiency. They’re also confident that adding robots won’t necessarily mean cutting human jobs.