When Janet Napolitano was in charge of the Department of Homeland Security, the illegal alien hacks thought she deported too many of them. (However, it has been known for some time that the deportation figures of the current administration were inflated — Obama admitted the numbers were “deceptive” back in 2011.)

Below, Napolitano shared a meaningful moment in 2010 with Obama after he signed a weak border security bill to pave the way for amnesty. 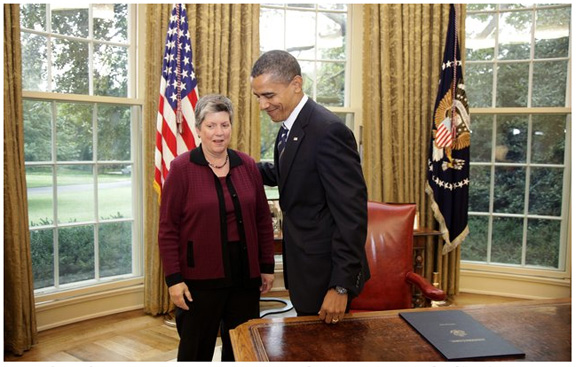 In her first major address in her new gig as head of the University of California system, she made a point of plopping down some serious cash for illegal alien students who want a free ride to UC — $5 million, at a time when the university has been struggling with its budget and tuition has been marching ever upward.

In an October 19 Huffpo article, University Of California Budget Still Rocky After Years Of Drastic Cuts, the former UC Berkeley Chancelor Robert Birgeneau remarked, “The reality is that the current budget is not stable in the long run and so the challenges are not over.” Today at UC, the annual price tag for tuition is $12,192, nearly twice what it was in 2006, and an increase is likely before long.

Yet Janet Napolitano can find $5 million in loose change to make the lives of foreign lawbreakers still easier as they take college slots that should go to California young people. Illegal alien students already get taxpayer-subsidized tuition and financial aid, but apparently that red carpet treatment was not enough and now they must have special advisors.

UC Berkeley, for example, already has an office for inclusion and equity with a staff of 150 and a budget of $17 million. There can never be too much sensitive coddling for non-Americans in diversity-crazed California, it seems.

SAN FRANCISCO (AP) — University of California President Janet Napolitano said Wednesday she is devoting $5 million to provide special counseling and financial aid for students living in the U.S. illegally, a move aimed at disarming critics who worried she would be hostile to the small but vocal student population.

The former Homeland Security Secretary announced the initiative in her first public address since she became head of the 10-campus university system a month ago — an evening appearance in San Francisco organized by the Commonwealth Club. She also pledged $10 million for recruiting and training graduate students and post-doctoral research fellows.

“Let me be clear. UC welcomes all students who qualify academically, whether they are documented or undocumented,” she told an audience of several hundred people. “Consider this a down payment — one more piece of evidence of our commitment to all Californians.”

Napolitano said the money earmarked for immigrant students would be used for financial aid and to hire advisers at each campus who could provide guidance on matters ranging from how to pursue legal U.S. residency to applying for graduate school.

“They do merit special attention,” she said. “Oftentimes they are from families who are very poor and first-generation, so have no one out there to talk to them about student life.”

University officials estimate that out of a student population of 239,000, the UC system enrolls about 900 students who were brought into the country illegally as children, a group of immigrants known as “dreamers” because of the stalled U.S. DREAM Act that would give certain youth a path to permanent residency.

As part of a bill signed by Democratic Gov. Jerry Brown, California this year started allowing students who are not legal U.S. residents and are therefore ineligible for most types of federal financial aid to apply for state grants and scholarships.

UC spokeswoman Dianne Klein said later that the $15 million Napolitano pledged in her remarks — $5 million for immigrant student support and $10 million for graduate students and research fellows — would not come from tuition or the university’s state-funded operating budget. It will be drawn from reserves in accounts the system has used to help finance faculty mortgages and campus efficiency projects, Klein said.

Since her surprise appointment as the university’s 20th president in July, Napolitano has devoted energy to alleviating the concerns of campus activists who argued she would not be able to advocate effectively for such immigrants because of her background in Washington and as a former governor of Arizona.

Napolitano met with student groups representing so-called dreamers on the day she was confirmed and during her first day on the job. She told reporters after the speech that while she had been listening to their concerns, allocating the special funding was a decision she had reached independently.

In prepared remarks, Napolitano also addressed faculty skeptics who have questioned her qualifications to lead the University of California given her lack of experience in academia.

“I think my selection was, in good measure, a result of my experience running large, complex institutions, such as the third-largest department of the federal government and the state government of Arizona,” she said. “I made clear from the start that my learning curve at UC would be a steep one. But I have faced steep learning curves before.”

Napolitano said that, going forward, she sees her job as ensuring that the university continues to fulfill its mission of both educating students and serving as an incubator for important research, and that the extra $10 million she is investing in graduate students is a way to do that.

Napolitano said she would present more “big ideas” to the university’s governing board when she attends her first meeting as the system’s president next month.