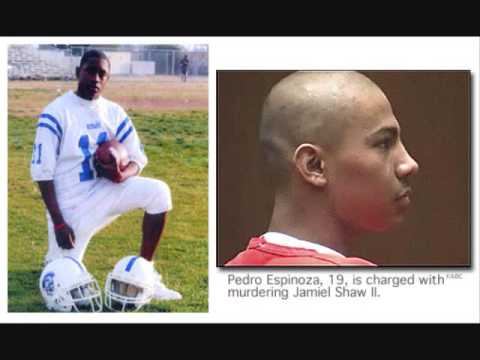 With the San Francisco slaying of Kate Steinle still fresh in people’s minds, the Fox morning show invited another parent who lost an offspring to an illegal alien’s bullet: Jamiel Shaw was a rising high school football star who had been contacted by top universities for an athletic scholarship. But he was murdered just three doors from his home by an illegal alien gangster who had been released the previous day from an LA jail. See my 2008 article, Jamiel Shaw Gang Killing Enrages Los Angeles.

CARLSON: A seven-time convicted felon is back behind bars this morning this time for an unimaginable crime; he’s accused of murdering a 32-year-old woman at a popular San Francisco peer in broad daylight for no apparent reason. There he is: his name is Francisco Sanchez and he shouldn’t have been in this country in the first place. He’s an illegal immigrant, he’s been deported five times and found a home in San Francisco, an official sanctuary city.

Well, Jamiel Shaw Senior’s son was killed tragically by an illegal back in 2008. He recognizes this story in a very personal way and he joins us now. Mr. Shaw, thanks for coming on this morning. . .

SHAW: To make a long story short an illegal alien was released from the county jail on his third gun charge, four months early on an eight-month charge into the community, within 24 hours he’s in my neighborhood, He shot my son dead right on his own street, three houses from where he lived.

CARLSON: That is that is really heartbreaking and I think viewers watching must be wondering the most obvious question which is if someone is held on a very serious charge like a gun charge and he’s not even in this country legally, why isn’t he sent back to his country of origin right away and for good? Did you ask that question of authorities?

SHAW: Of course, of course and they just say well he lied. and everyone’s an illegal alien lovers right now you know. That’s what Donald Trump was talking about and they called him a liar, but I am here to prove it. Miss Steinle, she should have proved it, the Bologna family, there’s thousands of people who will be murdered by legal aliens and raped and child molesters and drunk drivers. So Donald Trump was right on.

In our community, what we call the death community, Donald Trump is speaking for us, our dead.

CARLSON: So why do you think it is that when people speak up and say look I don’t hate illegal immigrants or immigrants of any kind but one who murdered my child shouldn’t be here? Why are those people attacked? Why is it considered outrageous to point it out?

SHAW: It would cause people to stand up when people hear the stories. They’ll stand up and want something done about it . . .

CARLSON: Let’s take a look at this man, Francisco Sanchez, with seven prior felony convictions, not jaywalking, felony, four involved narcotics. He was deported five times and yet he found a home in San Francisco because it is explicitly a sanctuary city a city that ignores federal immigration law. . . 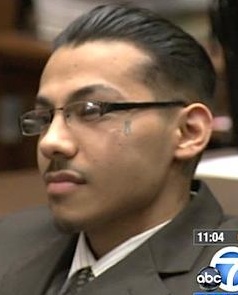 It isn’t mentioned in this brief interview, but the illegal alien Pedro Espinoza (pictured) who murdered young Jamiel Shaw was an exceptionally violent man, even among his gangster peer group — something I learned by following the details of his trial.

Amazing facts are revealed during trials, so the plea deals the court system apparently likes do a disservice to the public with its need to know the extent of crime happening in their communities.

How violent was Pedro Espinoza? News reports say he was the aggressor in several incidents while he was incarcerated, including attacks on other inmates. After the shooting, Espinoza identified himself as a Blood Killer as part of his rank of the 18th Street Gang, and had a B.K. tattoo behind his ear. He tried to punch out an officer who was interrogating him in jail.

One might think that such a dangerous man would be deported to safeguard the community, but Los Angeles’ Special Order 40 — an extreme sanctuary city ordinance — prevented government from protecting public safety. The power of the illegal alien lobby has turned government upside down in sanctuary zones and causes preventable deaths.