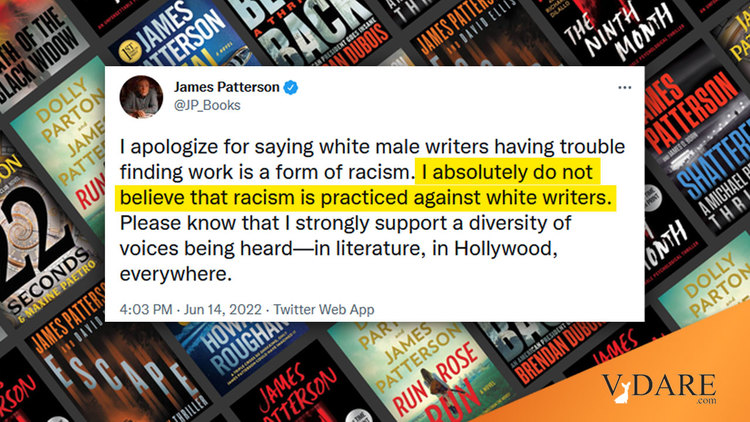 James Patterson: Not All White Authors...

The best-selling novelist, 75, is facing backlash from critics and writers. He apologized Tuesday.

James Patterson is a former advertising executive who brought big business mass production methods to writing novels. He publishes many books under his brand name each year, usually ghostwritten by little-known novelists working under his executive supervision. His business model has proven vastly successful, and he’s second to J.K. Rowling among authors in wealth, with something like $800 million.

My view is that Patterson’s not much dragging avid readers away from better books, but is instead expanding the number of book-readers by targeting people who would otherwise be watching TV or staring blankly out the bus window. So, I don’t have anything against Patterson.

As James Patterson reflected on the state of the writing world today, the best-selling thriller novelist with an estimated net worth of roughly $800 million lamented how one group in particular is having a hard time finding work: White men.

In fact, America’s richest author noted to the Sunday Times how White males — specifically older White males — are experiencing what he described as “another form of racism” when it came to trying to break through as writers in TV, film, theater or publishing.

“What’s that all about? Can you get a job? Yes. Is it harder? Yes,” Patterson, 75, told the British newspaper. “It’s even harder for older writers. You don’t meet many 52-year-old white males.”

That’s what everybody has been asking for, isn’t it: fewer white men with good jobs? And now that’s happening in publishing, which is Good. But, James Patterson, the world’s greatest expert on selling books, has now publicly noticed that that’s happening, which is very, very Bad.

Now, Patterson is facing backlash from critics and writers who say the author has blatantly ignored recent data showing how the publishing industry has been and remains “a business that is owned by white men.”

Is it? I went to that link to find quantitative evidence on whether the publishing industry is owned by white men, but all I found was three published black women authors complaining. E.g.,

“I mean, for me this is a spy book, but it’s secretly just an opportunity to talk about a black woman’s feelings for 300 pages,” Wilkinson says.

In a diversity self-audit from Penguin Random House, the publisher found that about 75 percent of the contributors during that period were White. Just 6 percent were Black, while 5 percent were Hispanic, the audit shows. The company also acknowledged that more than 74 percent of its employees were White.

But what percentage are white men? After all, Patterson is talking about white men. Penguin Random House’s report doesn’t reveal that precise number, but it looks like white men are underrepresented in their work force relative to their share of the population.

A 2019 survey from children’s publisher Lee and Low Books found that 85 percent of the publishing staffers who acquire and edit books are White people.

A 2020 report from the New York Times found a similar result across the U.S. publishing industry, with 89 percent of the books written in 2018 being penned by White writers. …

Once again, no breakout of white men.

On Tuesday afternoon, Patterson tweeted an apology, saying: “I absolutely do not believe that racism is practiced against white writers.”

What's the point of being an ultra-rich, best-selling author if you can't say what you think?

The Washington Post then piles on further evidence of Patterson’s Badness:

… In addition to his comments about White men in publishing, Patterson denounced the decision from his own publisher, Hachette Book Group, to drop Woody Allen’s memoir in 2020 after employees staged a protest of the book due to the long-running allegations of sexual abuse against the famed director. Allen’s memoir, “Apropos of Nothing,” was eventually picked up by Arcade Publishing.

“I hated that,” Patterson said of Allen’s book getting pulled. “He has the right to tell his own story.”

Patterson added, “I’m almost always on the side of free speech.”

Can you imagine the vile gall of James Patterson? He supports free speech, even to the extent of letting Woody Allen publish his memoirs!?!

But much of the attention from Patterson’s interview was on his claim that White men are struggling to find work in publishing. Gina Denny, an associate editor at the publisher TouchPoint Press, noted that when USA Today reported on Patterson’s comments, just nine authors on the newspaper’s list of 150 bestsellers were non-White writers. Three of Patterson’s titles made the list, while just five women of color and four men of color were on the bestseller list. The rest were made up of White men between the ages of 36 and 84, Denny said — and some of the White males on the list have long been dead.

Not All White Authors Are White Men.

No, Gina Denny found that 48 of the 150 bestsellers were by white men and 9 by People of Color, so that leaves 93 by white women like herself, or 62%.

The Washington Post’s own source sums up her count:

Will the Washington Post issue a retraction of this blatant misstatement?

So white women are almost overrepresented by a factor of two. Is that because the publishing industry is “overwhelmingly white women” like Ms. Denny?

Or is that because white women are just so much better writers than others?

Probably it’s mostly because guys are playing video games instead of reading, which then contributes to a spiral where white men aren’t much hired by publishers and white male authors aren’t much considered.

“Dead white men are statistically as likely to be on the USA Today bestseller list as a person of color,” Denny wrote.

What have dead white male best-selling authors George Orwell and Dr. Seuss ever done for literature?

What’s striking is how few white men in their primes are on the bestseller list. Of Denny’s count of 150 best-selling books, only ten are by white men under age 50.

But then, what have white men under the age of 50 ever contributed to literature?