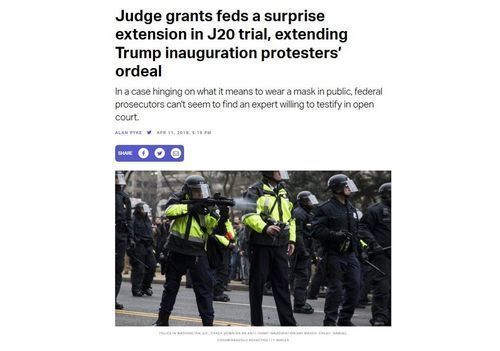 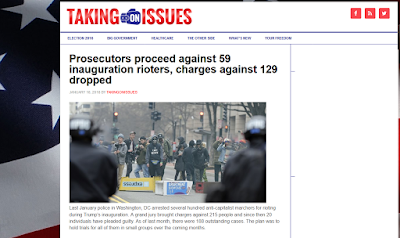 About that April 17 D.C. trial of defendants charged with rioting at President Trump’s Inauguration…

First off, that date was already a continuance.

The MSM has apparently stopped even reporting on developments in the case, and only racial socialist bloggers are still writing on it.

It seems that the prosecution is asking for the delays, because Chief Judge Robert Morin has rejected prosecution requests to have an expert, who had infiltrated the riot group, testify pseudonymously, and the prosecution has been unable to find an expert willing to testify using his face and real name, seeing as that would end his career as an undercover investigator.

Thus, changing judges changed nothing. Judge Morin clearly also believes in a right to riot, at least when the target of the riot is President Donald J. Trump.

The racial socialists, playing moral equivalence, see this as a great “irony,” but it’s neither equivalent nor ironic.

There is nothing illegal about a law enforcement officer investigating people while using a false name, or for an investigator to give pseudonymous testimony, with his face hidden. However, it is a crime in D.C., as in most other jurisdictions, to wear a mask during a “protest” (read: riot).

In a case hinging on what it means to wear a mask in public, federal prosecutors can't seem to find an expert willing to testify in open court.

WASHINGTON, D.C. — Irony lives. Just ask the almost 60 anti-Trump protesters who were arrested on Inauguration Day in 2017 and are still awaiting their trials.

Prosecutors have argued that protesters seeking to shield their identities for fear of political reprisal [N.S.: Liar] are doing something wrong, but on Wednesday, they won a shock delay in the case specifically because their own expert witnesses are struggling with similar questions of anonymity and online reprisals.

From an initial group of more than 200 people who faced felony rioting and destruction of property charges in the case, 59 defendants are left. Six were acquitted on all counts in December, a defeat that prompted the U.S. Attorney’s Office and lead prosecutor Jennifer Kerkhoff to drop charges against more than 100 other people.

The next group trial was set to begin next week, almost exactly 15 months after a handful of protesters [sic] smashed store windows and scrapped [sic] with cops. The judge’s surprise ruling on Wednesday knocks the start date back to early June — and keeps the defendants’ lives in disarray for at least another couple months on top of the year-plus of disruption they’ve endured already.

[Note the disruption of many Unite the Right demonstrators’ lives, who have spent months in jail, whereas the J20 riot defendants were immediately bonded out.]

One of the five accused present on Wednesday has had to put work on hold to commute down from Baltimore for hearings… Another, Elizabeth Lagesse, was just a few weeks away from moving to the West Coast and starting a tech career when she joined the Inauguration Day march and wound up facing decades in prison for being nearby when people smashed windows.

[So, Lagesse shouldn’t have gone to the riot. She knew what was planned.]

“I have had my life entirely on hold for the past year. I’ve had wedding plans on hold….

“She just dropped charges against 129 people who lived for a year in fear of decades in prison. Every night they went to bed thinking about that, their family, their friends all had to live with that dread. She dropped the charges on a whim, and now she’s never going to face any kind of sanction,” Lagesse said. “She might get in trouble with her boss but there’s no legal recourse.”

[So, there’s a right to riot, but prosecutors heroically seeking to enforce the law, in the face of racist, would-be revolutionaries and rogue judges should be, what, disbarred? Imprisoned?]

The request for a delay exasperated the cluster of lawyers at the defense table Wednesday, who have shuffled personal and professional calendars repeatedly…

The government’s cases here hinge on the idea that the protesters formed “a sea of black masks,” as Kerkhoff put it in December. Though the defense was not allowed to argue that the masks were a necessary protection in an age when online amateur sleuths sit ready to “doxx” political opponents so they can be threatened and harassed over their political views, Kerkhoff’s argument still didn’t carry….

[Gimme a break! It’s the Communists and Anarchists, with their MSM accomplices, who are doxing people, and ruining their lives. One of their tricks is to commit assault and battery against their opponents, so as to learn their opponents’ names from the criminal justice system, and dox them. Besides, they weren't wearing masks during the Inauguration Day riots to protect themselves from harm but from the law, in order variously to anonymously engage in violence, or to permit masked rioters to blend in with them. That’s probably why the defense was not permitted to make that specious argument. Of course, Alan Pyke knows more about this conspiracy than I do.]

…. But now prosecutors can’t find an expert witness who’s willing to testify under their own name, after the same judge rejected a motion to allow the government’s expert to use a pseudonym. The government’s anonymity request noted Kerkhoff herself has been targeted with ugly mailings to her home.

The government feared — much as the protesters they’ve targeted might have when the [sic] wore a mask to protest a president famous for his violent fans [liar] — the expert might get harassed or worse if their identity were public. But had their expert witness in the first December trial been allowed to testify anonymously, it might never have come to light that the detective had shared pro-Trump and anti-protester views online.

The judge’s rejection of the pseudonym request apparently set off a scramble in Kerkhoff’s office, as at least three potential expert witnesses have dropped out. The government now has until the end of April to name the expert witness they’ll field….