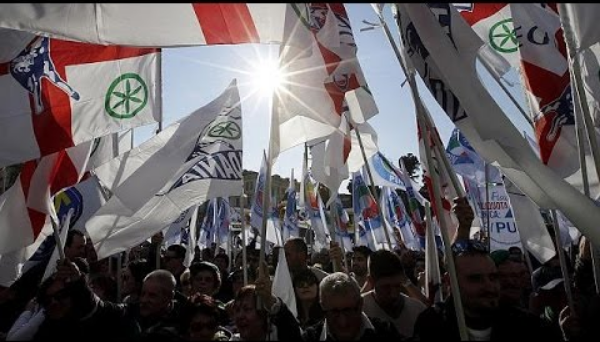 This just in — people still don’t like excessive immigration of hostile foreigners forced upon them. Thousands of pro-sovereignty Italians showed up Saturday to protest Italy’s continued acceptance of economic grifters and potential jihadists from Africa and the Middle East.

Below, Italians protest being inundated with unwanted foreigners. Italy’s unemployment rate is 12.9 percent, but is 42 percent among those aged 15 to 29. 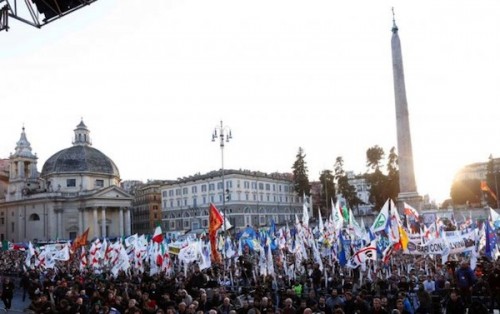 Italy is disproportionately affected because it is geographically the closest to north Africa and the Italian island of Lampedusa is just a 70 miles by boat from Tunisia.

How rough is it getting out on the Mediterranean? One measure reported by The Local: Italian coastguard wants to carry weapons. In a recent incident, traffickers armed with Kalashnikovs threatened coast guard officers during a rescue of thousands of Africans in danger of drowning close to Libya.

Poor Lampedusa (with its tiny population of 4500). The small island continues to be swamped by the tide of African “migrants” in search of European freebies. In mid-February, the BBC reported the island’s reception center held more than 1000 persons, four times its capacity: Lampedusa migrant centre conditions ‘desperate’ after rescues.

Italian citizens deserve to be protected from a Camp of the Saints scenario by their government and they are saying so.

Thousands of Northern League protesters have poured into Rome from their political base in the north to demand the Italian government keep out immigrants.

Matteo Salvini’s regional-based party drew 40,000 people a few months ago in Milan with the same agenda opposing immigration, which they blame for Italy’s economic woes.

Salvini said Premier Matteo Renzi’s government is “selling out to Europe.” With regional elections this spring, Salvini hopes to capitalize on the growing strength of other right-wing movements in Europe, especially after the recent attacks by Islamist terrorists. Smugglers send waves of migrants and refugees from Libya to Italy.

Police were trying to keep marchers in a counter-demonstration from clashing with Salvini’s supporters.