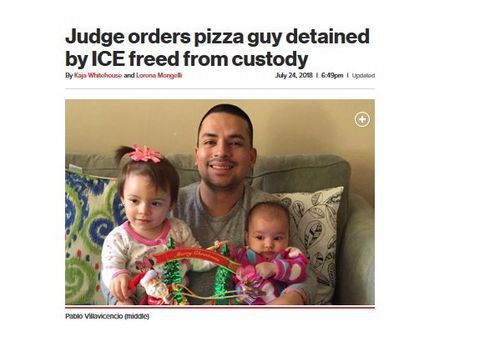 A few weeks ago on Radio Derb I brought up the case of Pablo Villavicencio, an illegal alien from Ecuador.

Villavicencio broke into our country some years ago, was discovered living here illegally, and given a court order to leave voluntarily. That — the court order — was in 2010.

Instead of obeying the court order, Villavicencio just went on living here. Not only that, he got married to an American woman and begat two children, girls currently aged three and two. ICE meanwhile issued a warrant for his arrest because he'd ignored the court order.

Well, June 1st this illegal, who works as a fast-food delivery man, brought an order to soldiers at Fort Hamilton, an Army base in Brooklyn. The base guard ran a background check before admitting him, as he is required to do for base security. He found the ICE warrant and notified them, and now Villavicencio is being held at an ICE lockup in New Jersey.

He should of course have been deported by now, eight years after having been ordered to leave; but a lefty judge — actually an Obama-appointed lesbian — granted him a stay of deportation and  a court hearing for July 20th. [Radio Derb, June 15th 2018.]

The court has just ruled.  Guess what:

The ​illegal ​Ecuadorian immigrant tossed in detention after he delivered a pizza to a Brooklyn army base was ordered released from ​custody Tuesday and his deportation was temporarily halted.

Pablo Villavicencio, also known as "Pizza Guy," is expected to be released from the Hudson County Correctional facility in Kearny, NJ, Tuesday​ night​, according to a representative of the Legal Aid Society, which has been fighting his deportation. ["Judge orders pizza guy detained by ICE freed from custody" by Kaja Whitehouse and Lorena Mongelli; New York Post, July 24th 2018.]

Here's what the fool of a judge said, as quoted by the New York Post.  Actual quotes:

"Although he stayed in the United States unlawfully and is currently subject to a final order or removal, he has otherwise been a model citizen, … He has no criminal history. He has paid his taxes. And he has worked diligently to provide for his family."

"A model citizen!"  Except, of course, that he's not a citizen at all.

"He has no criminal history." Other than that "he stayed in the United States unlawfully."

Here is the judge, who must at some point, I suppose, have graduated from law school.  Hard to believe.