Israel: Thousands of Africans Demand to Be Accepted as Refugees

On Sunday, tens of thousands of Africans gathered in what they called a “Freedom Rally” in Tel Aviv, insisting that their rude, unlawful presence should be celebrated and welcomed. 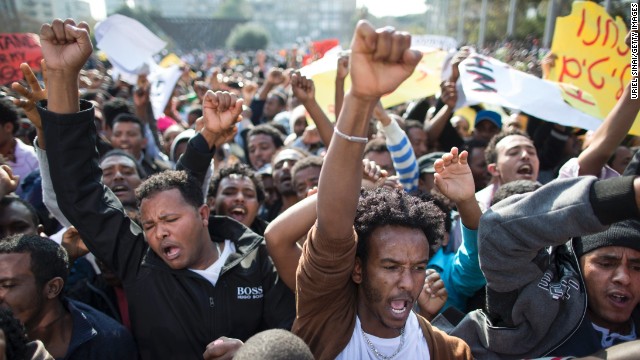 It’s amazing how often huge mobs of people think they can relocate to another country en masse because of their own desires alone.

Fleebag Africans have not been popular in Israel particularly since mobs of them started taking up residence in parks and committing violent crimes like rape. In May 2012, a rally of a thousand Israelis demanded that the illegal aliens be expelled.

The public can’t be happy about the current demanding pests.

Below, uninvited Africans camping out in an Israeli park. 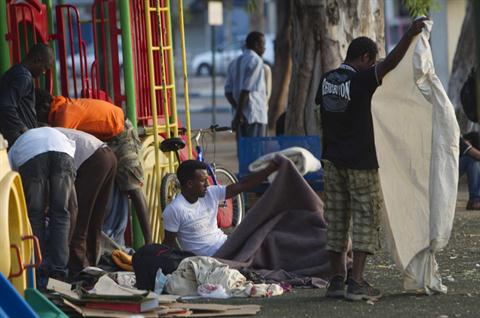 Israel is a tiny country, of around 8,000 square miles area, a little larger than New Jersey. It’s wealthy, but is hardly in a position to be babysitting thousands of freeloader foreigners looking for an easy entrance to the first world. Israel is too busy with its concerns of self-defense from neighbors like nearly nuclear Iran to waste its energy on a welfare sideshow for scroungers. It is surprising the normally orderly Israelis have allowed the situation to get so out of control.

But the Africans know to play the victim card when they arrive, claiming genocide back home when most are economic migrants. There are plenty of places in Africa where they could be safe, but they want to mooch a modern lifestyle.

Their chants fill the air, summing up their message: “We need asylum.”

Many are fleeing persecution from war-torn areas like Sudan and Eritrea. The threat to their lives pushes them to undertake the dangerous journey via smugglers’ routes to Israel. A vast majority cross the Sinai Peninsula, known for being a hotbed of kidnapping and organ harvesting.

Once across the border in Israel, they try to claim asylum.

“All of us are fleeing genocide, fleeing dictatorship regimes. Looking for protection,” says the African Refugee Development Center’s Mutasim Ali, who came to Israel from Darfur. “(A migrant) doesn’t care where he gets it. We know it’s too difficult to cross the border making our way to Israel, but that’s the only option at the time.”

The asylum seekers complain that the Israeli government isn’t viewing their goal as legitimate, but rather sees them as migrant workers.

The Israeli government refers to the asylum seekers as illegal migrants who are in the country to work.

They blame them for an increase in crime and say they threaten Israel’s internal security. The government says it is increasing the number of security personnel to combat the crime.

They are also giving refugee seekers willing to voluntarily return to their home countries a cash incentive of $3,500. But if that doesn’t work, then the government says they’ll deport them.

“We are determined to deport the tens of thousands of illegal migrants who are here after having reduced the number of illegal labor migrants who enter Israel’s cities,” said Prime Minister Benjamin Netanyahu last November during his weekly Cabinet meeting. “The steps that we unanimously approved today are proportionate and necessary for maintaining the Jewish and democratic character of the state and will restore security to Israel’s citizens while upholding the directives of the High Court of Justice and international law.”

Basow Ibrahim gave up being a rebel in Sudan’s Nuba Mountains over a year ago. While fighting the Khartoum government, he said, he realized there was more to life.

“I’m here because I want to protect myself. I want to save my life,” Ibrahim said. “I want to finish my education.”

Ibrahim’s story is similar to that of many refugee seekers.

They say they plan to return home to their families and friends once the threat to their lives is gone.

Until that day comes, they say they hope Israel will keep them safe by granting them asylum.