In today's Islamic immigration-invasion of Europe, a building permit for a mosque may be as valuable as a bomber squadron in an earlier war.

Indirect aggression through demographic warfare is the current game plan to establish Eurabia building by building, block by block, by hostile Muslim immigrants who intend to turn Europe into dar al-Islam, under a worldwide Islamic government.

Keep in mind that a 2006 poll found 40 percent of Muslims residing in Britain want sharia law there, so the writing is on the wall for all to see.

A recent battle took place in a council meeting in Clitheroe.

CLITHEROE, England — On a chilly night this winter, this pristine town in some of Britain's most untouched countryside voted to allow a former Christian church to become a mosque.

The narrow vote by the municipal authorities marked the end of a bitter struggle by the tiny Muslim population to establish a place of worship, one that will put a mosque in an imposing stone Methodist church that had been used as a factory since its congregation dwindled away 40 years ago.

The battle underscored Britain's unease with its Muslim minority, and particularly the infiltration of terrorist cells among the faithful, whose devotion has challenged an increasingly secular Britain's sense of itself. [British town votes to change a church to a mosque, International Herald Tribune 4/1/07] 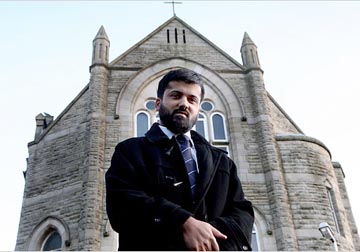 However, apparently all is not completely lost in Britain. In the town of Dudley, the locals are fighting back. The council there voted down a proposal to build a mosque from scratch, because the scheme had "provoked widespread opposition."

The Dudley resistance is encouraging to see, but where is the British version of the Minutemen?