Islam Is Not So Peaceful: Paul Weston Cites Koran and Evidence

What kind of faith has to insist on a daily basis that it is a “Religion of Peace”?

One that isn’t, perhaps?

Paul Weston is a defender of western civilization, not an easy thing in Islam-endangered Great Britain these days. He is also the Chair of Liberty GB and occasionally uses Youtube to share his thoughts about politics in the face of unfriendly diversity.

Weston’s latest effort concerns the claim of Islam to be peaceful, and he criticizes that idea (not hard, really) plus a challenge to Prime Minister David Cameron to act honestly regarding the security threats in today’s Britain because of the enemy inside the gates.

Last spring Weston was arrested for quoting Winston Churchill’s warning about Islam in public. Such is the declining condition of free speech when Muslims complain about honest depictions of their history and current activities.

Britain’s Prime Minister David Cameron is unclear on the concept that immigrants must assimilate to the values of the nation they chose, rather than the other way around. 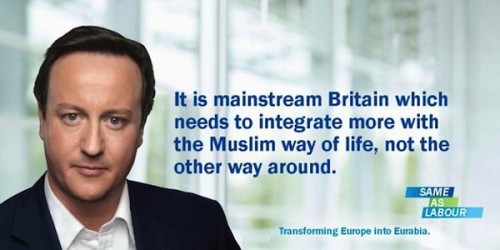 How can you tell when a civilisation is in danger of collapse? That’s easy, it’s when every leader of every country that make up Western civilisation no longer accept reality and deal only in lies and cowardice when presented with genuine danger. In the midst of worldwide Islamic violence, war, terror, torture and rape we are told Islam is a religion of peace over and over again, which reminds me of George Orwell’s dystopian novel Nineteen Eighty-Four … which was supposed to be a warning rather than a political manual on how to run a country.

David Cameron and other Western leaders don’t appear to have read it. Every time I hear them say Islam is a religion of peace I am constantly reminded of Orwell’s doublethink and newspeak 1984. It is a sign of total cowardice to state Islam is peaceful when it is in fact an ideology of supremacism and war. Islam is the Koran, the Koran is Mohammed and Mohammed was a warlord and a murderer.

Although Mecca today is the international shrine to Mohammed, he first had to defeat the Meccans when they laid siege to his exiled home in Medina. Mohammed won the battle and was then involved in the execution by beheading of 700 Jewish male members of Medina’s Qurayza tribe. The women and children were taken as slaves and sex slaves.

Beheading, as we now know only too well, seems a particular favourite amongst Muslim murderers. This is because it is instructed in the Koran in a number of verses.

Koran 5:33: “The punishment of those who wage war against Allah and His Messenger is execution (by beheading), or crucifixion, or the cutting off of hands and feet from opposite sides.”

Koran 8:12: “I will instill terror into the hearts of the unbelievers: smite ye above their necks and smite all their finger-tips off.”

Koran 47:4: “Therefore, when ye meet the Unbelievers strike off their heads.”

So you see, Mr Cameron, when Muslim murderers cut off soldiers’ heads in London whilst quoting the Koran, it does – contrary to your blatant lies – have EVERYTHING to do with Islam.

David Cameron seems unaware that the perfect man in Muslims’ eyes was a supremacist warlord, a murderer and a sex-enslaver of little girls, but then everything about Islam is supremacist. Islam translated means ’submission’. What sort of a religion of peace calls itself submission? And what happens if you want to leave this religion of peace? You become an apostate and the sentence for apostasy is death. In other words, if you want to leave the religion of peace you will be killed. Not really very peaceful at all Mr Cameron, wouldn’t you agree?

This religion of peace, this religion of Islam, kills its own women if they bring ‘dishonour’ upon a family. Honour killings, honour violence, the stoning to death of adulteresses, the hanging of homosexuals – how can a religion which carries out these acts of barbarism possibly be considered a part of a peaceful religion, Mr Cameron?

Islam divides the world into two spheres: the area where Islam rules and the area where it does not. The first is called the Dar al-Islam, which means the House of Islam or the house of submission; the second is called the Dar al-Harb, which means the House of War. How many peaceful religions call areas they do not control the House of War, Mr Cameron? All Western countries with large and growing Muslim populations find themselves, whether they like it or not, in the House of War, which is why our security services are engaged in a constant battle trying to stop the followers of the religion of peace blowing us up on trains, planes and automobiles.

The reason Muslims consider themselves to be at constant war with us is purely because of the instructions in the Koran and the hadiths, the hadiths being accounts of Mohammed’s personal preaching as opposed to the verses from the Koran which are supposed to be the literal words of Allah. The Koran is littered with calls of war against the disbelievers, and the main call to war in the hadiths is Bukhari 2:24 where Mohammed states: “I have been ordered to fight against all men until they testify there is no God but Allah and Mohammed is his messanger.” How is that for peaceful prose, Mr Cameron?

The verses in the Koran are subject to something called abrogation, whereby the later verses cancel out the earlier verses. As the warlike verses occurred at a later date than the earlier peaceful verses, it is only the warlike verses that count. Mohammed’s final verse on war which negates all earlier verses is Koran 9:29: “Fight those who believe not in Allah until they pay the jizya with willing submission, and feel themselves subdued.” This, Mr Cameron, is why the religion of peace is waging war and terror across the entire globe today.

And good old Mohammed was not just a warlord, he was also a rapist and a sex-slaver, which is exactly why we see rape and sex slavery happening today not just in Syria but in towns and cities all across the West wherever there are large numbers of Muslims, notably Malmo in Sweden which is now the rape capital of Europe, closely followed by Rotherham in England and any number of other cities and towns.

There are a number Koranic verses calling for sex-slavery. Whenever there is mention of people who “your right hand possesses” Mohammed is talking specifically about slaves, so Koran verse 33:50 states: “O Prophet! We have made lawful to thee thy wives to whom thou hast paid their dowers; and those whom thy right hand possesses out of the prisoners of war whom Allah has assigned to thee.” Koran 4:24 states: “And all married women are forbidden unto you save those whom your right hands possess.” What Mohammed is saying here is that even sex with married slaves is permissible.

The Islamic State is currently, right now, selling sex-slaves in Syria, as is Boko Haram in Nigeria. Britain has recently passed a new sex-slavery bill in an attempt to halt sex-slavery in England, which is yet another aspect of cultural enrichment we are supposed to celebrate that we didn’t used to have before Islam arrived on our shores.

The reason why modern-day Muslims rape young girls in Western countries is because they don’t recognise non-Muslim or infidel rules anyway, but young girls are deemed sexually permissible because their perfect man, Mohammed, married one of his wives, Aisha, when she was six and consummated the marriage when she was nine. But you don’t consummate a marriage with a nine-year-old, you rape her. The Muslim rape epidemic carried out against non-Muslim underage girls is specifically down to Mohammed and the Koran. No doubt the next time such a story breaks in England, David Cameron will tell us that not only is Islam a religion of peace it is also a religion of sexual abstinence and purity …

Please Mr Cameron, enough of your lies and cowardice. You cannot deny reality any longer. Islam poses the greatest threat to our civilisation we have ever seen. The history of Islam consists of centuries of war against the West. Today, the Muslim population is growing nine times faster than any other demographic in Britain and demographers predict a Muslim majority amongst the young before 2050. What do you think the country will look like then? Do you honestly think we can avoid a civil war when expansionist Islam is so warlike, so intolerant and so supremacist?

This could be dealt with today, but to appease it, hoping it will eat you last – like Winston Churchill’s crocodile – is a total betrayal of your country and of our children and grandchildren. Say it after me Prime Minister Cameron: Islam is not a religion of peace and has never been a religion of peace. Islam is the Koran, the Koran is Mohammed and Mohammed was a warlord. Period.

Another British Prime Minister, William Gladstone, was made of rather sterner stuff when it came to bravery and reality. He held the Koran above his head and stated: “There will never be peace in the world whilst this accursed book exists.” In Gladstone’s day Muslims were not decapitating British soldiers on our streets whilst quoting the Koran, nor were they leaving video messages quoting the Koran before they self-detonated on London Underground trains and buses. The reality of violent Islam is all around us. It is long past time to tell the truth Mr Cameron.