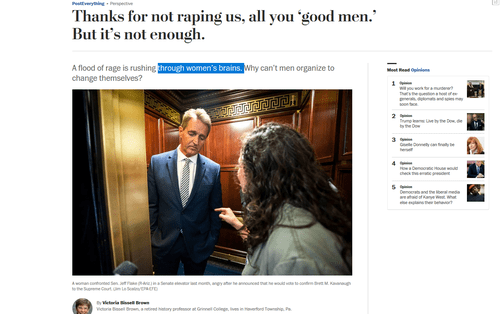 Below I posted excerpts from a remarkable Washington Post op-ed by Victoria Bissell Brown, a retired professor of history, about all the rage she’s venting at her poor husband of 50 years and how her overwhelming anger has something to do with Kavanaugh or Trump or Republicans or men or whatever.

I researched a little into Professor Emeritus Bissell Brown, and what’s interesting about her is that she’s not Andrea Dworkin or Shulamith Firestone.

Other than being a liberal feminist, which is hardly unusual for an academic, she appears to be a pretty normal person, who is, for example, devoted to her cute grandchildren.

My new Taki’s Magazine column, “2013: A Race Odyssey,” is a book review of Jonathan Haidt and Greg Lukianoff’s book The Coddling of the American Mind. Haidt, a psychology professor at NYU’s Stern school of business, is worried that America seems to be going through a nervous breakdown, one centered on college campuses. While liberal women in the media are quick to say that they are being driven nuts by Donald Trump, Haidt and Lukianoff’s research points toward 2013 as the year in which new levels of mental troubles suddenly broke out on campus, two years before Trump came down the escalator. As I sum up one of their findings:

The authors cite alarming evidence of a recent increase in emotional problems. For example, the percentage of college students who said they suffered from a “psychological disorder” increased among males from 2.7 percent in 2012 to 6.1 percent by 2016 (a 126 percent increase). Over the same four years, the percentage of coeds who saw themselves as psychologically afflicted rose from 5.8 percent to 14.5 percent (150 percent growth).

Haidt and Lukianoff blame the explosion in social media and smartphones after 2007, which seems fairly plausible, but has a hard time explaining exactly why liberal America went nuts in 2013.

The notion of a Late Obama Age Collapse that began modestly in Obama’s 2012 get-out-the-vote drive and metastasized in 2013 is something that accords with my observations. As I wrote in Taki’s:

I suspect, instead, that the most important difference on campus between 2012 and 2013 was that in 2013 the Obama administration no longer had to worry about reelection and thus didn’t have to continue to put up a moderate front. As I had predicted in my 2008 book America’s Half-Blood Prince, in their second term the future was now for the Obamaites, and it was time to get while the getting was good.

It’s time to think hard whether the fear is related to the loathing. Is the current level of hatred for men and for white people that is regularly expressed in the prestige press and in academia good for the souls of either the haters or the hated? Or are people like Prof. Bissell Brown being driven around the bend by the Conventional Wisdom?

Anyway, it’s worth reading my review of The Coddling of the American Mind.