Is It a Coincidence That Black Radicalism Is Most Violent Where the Weather Is Nicest?

Forecasted high temperature for Oakland, CA on Friday, February 20 is 69 F (20 C).
For approaching a half century, the spiritual capital of violent black radicalism has been Oakland, CA, the home of the Black Panthers and the surest bet to have a riot whenever some grand jury or court somewhere in America doesn’t do what blacks are worked up over.Might this have something to do with Oakland having the nicest climate this side of Honolulu?

In the 1830s, a Harvard student named Richard Henry Dana took a couple of years off school to serve on sailing boat voyaging out of Boston to go around Cape Horn and go up and down the California coast buying leather from the Californios to take back to Boston to make into shoes (some of which in turn were sold back to the Californios, who were said to disdain any work that couldn’t be performed on the back of a horse). The ship stopped at the decent harbor in San Diego, completely unprotected San Pedro, and the poor harbors at Santa Barbara and Monterey.

After going up and down the coast several times, the ship sailed into San Francisco Bay. Dana was struck by two things: This seemed to him the finest natural site for human habitation in the world, and practically nobody lived there. He made sure to call attention these two facts in his 1840 bestseller Two Years Before the Mast, and eight years later California belonged to the United States.

Almost simultaneously, gold was discovered inland from the Bay Area. San Francisco immediately became the city of the Bay Area because it was the easiest place to build a dock connecting dry land to deep water.

But if you had to do it all over again, you’d put the city across the Bay in sunnier Oakland and keep clammy San Francisco a lovely suburb, the way Marin County to the north is. (Mark Twain probably didn’t say, “The coldest winter I ever spent was a summer in San Francisco,” but he should have.) There’s more room in Oakland for a city, the terrain is less absurdly vertical, the hinterland is much larger, and the weather is nicer. 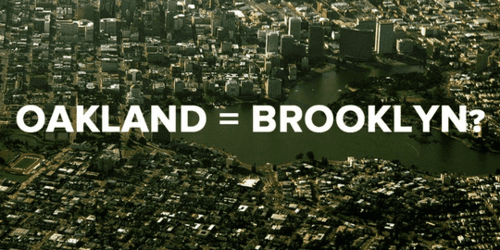 San Francisco has been gentrified several times over by now, but Oakland still has some of its WWII heavy industry / tenement vibe. But, obviously, in the long run, Oakland is too valuable a piece of terrain to remain partly a slum. But Oakland can stay slummy a long time if the inhabitants stay hostile and intimidating enough to other races. And, unsurprisingly, that is the local tradition. Peter Lawrence Kane wrote in 2013:

Crime in Oakland is considerably higher – the murder rate is more than four times that of New York, and there are six times as many burglaries. And while magically 25 degrees warmer in July than its neighbor, Oakland lacks a certain mystique that, through the alchemy of late capitalism, frequently transmutes into a brand – be it dreaded by long-term residents or lauded by elected officials and other boosters. Without putting Oakland down the way Gertrude Stein’s remark is frequently (mis)interpreted, there are no “Oakland Pickles” or “Oakland Industries” sweatshirts, yet. And much to that city’s credit, at least no celebs are naming their daughter “Oakland.”