The item quoted below (Taoiseach hoping to reach new deal on US work visa) is from the Irish Independent newspaper, so you have to wonder whether the proposal of increased work visas is a serious possibility or just some political BS, er blarney aimed at the voters of Ireland.

However, you can never underestimate Washington's treachery against the American people where immigration is concerned. Check out last year's lop-sided work visa agreement: 5,000 visas for Americans and 20,000 for Irish. Wouldn't it be more fair for Americans to get the bigger share of work visas, since the United States has a considerably larger population?? (US - 306 million; Ireland - 4 million)

So it is quite believable that Congress and BHO might import thousands more Irish workers even though over four million citizens have lost their jobs since December 2007. In Washington, it's American citizens last, always.

TAOISEACH Brian Cowen is seeking to reach an agreement with US President Barack Obama that would allow thousands more Irish people to work in the US.

It comes after a deal was agreed with Australia, which has allowed 10,000 of its citizens to live and work in the US for two years in return for access to Australia for US citizens.

Mr Cowen was speaking as it emerged that talks between the two governments on setting up a similar programme for Irish and US citizens were under way.

"We would like to get the model the Australians obtained, where people from both countries could come for a more prolonged period and work," he told RTE's 'Week in Politics'.

Last year, the US agreed that 20,000 Irish citizens could apply for year-long working visits. In return, 5,000 US citizens were allowed to come to Ireland.

The new 'E3 visa' deal is separate from discussions on the issue of the undocumented Irish, who are being detained in jail for up to 56 days prior to being deported and also have to share cells with convicted criminals. This has heightened fears among the estimated 50,000 Irish people living in the US who do not have visas.

Below, Ireland PM Brian Cowen presents the current resident of the White House with the traditional bowl of shamrocks prior to discussing additional Irish immigration. 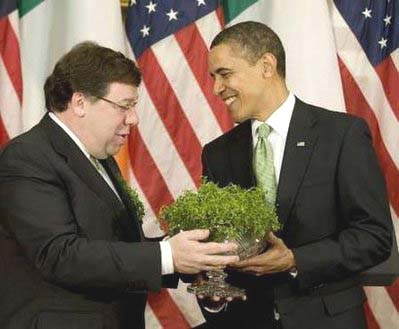