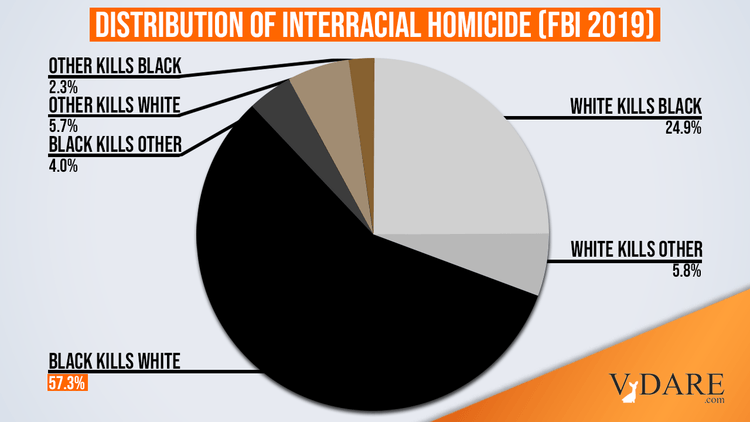 Interracial and Intersexual Homicide, US 2019

Earlier: FBI: The Murder Offender Ratio For Blacks To Nonblacks Is Greater Than The Ratio For Males To Females

The FBI breaks offenders and victims down into three racial categories—White, Black, and Other. Most Hispanics are consequently included in the White figures while Asians, American Indians, and people of mixed race are amalgamated into the Other category. All figures exclude homicides in which the race or sex of the offender is unknown: While whites (including many Hispanics) constitute 76% of the country’s population, they perpetrate just 31% of the interracial homicide that takes place within its borders. Peculiar characteristic of a putatively white supremacist society, that.

Most murder, like most violent crime in general, is intraracial. Interracial murder represents 15.7% of all homicide. Some 84.3% of all murderers and murder victims are of the same race, broadly defined.

Maybe the idea of systemic racism against non-whites has a tough time withstanding the empirical realities of criminal activity in America, but The Patriarchy doesn’t get off the hook so easily: