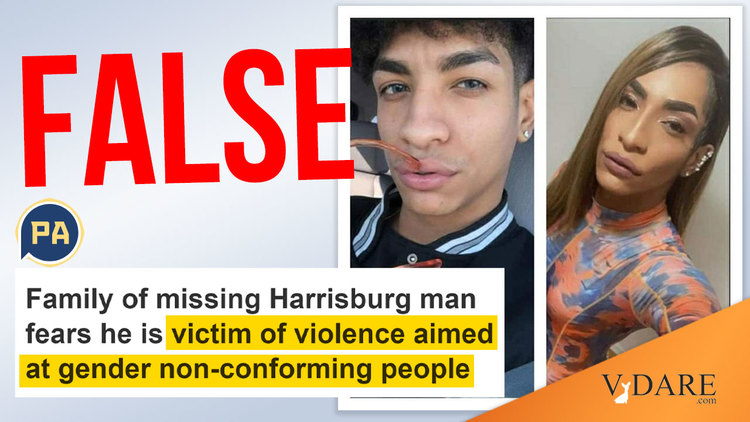 Innocent Question:  Should Journalists Be Allowed To Spin Out Entire Hate Crime Stories Based on Nothing But Pure Speculation? That Then Turn Out To Be FALSE?

Earvin Otero was a 26-year-old cross-dressing Puerto Rican found dead in a ditch from a single-car accident outside of Harrisburg, Pennsylvania.

He’d been there for nine days.

There was no evidence that a Trump supporter or anyone else had anything to do with his death.  Given that it was a single-car accident, it was probably his own intoxication that killed him.

But just a few days before that, another journalist for PennLive embarked upon a Jussie Smollett–worthy story guessing that Otero was the victim of a hate crime, complete with loads of purported statistics about anti-transgender hate killings [Family of missing Harrisburg man fears he is victim of violence aimed at gender non-conforming people, by Ivey DeJesus | idejesus@pennlive.com, March 25, 2022].

One relative simply flatly stated that Otero WAS the victim of a hate crime.

Family fears #missing #Harrisburg #transgender man may be #victim of #violence aimed at #LGBTQIA #EarvinOtero 26 was dressed as a woman when he was last seen March 20, 2022 at #MamajuanaNightclub in #Lebanon #Pennsylvania

Truth be told, a journalist today wouldn’t even need family speculation—she could build the story on her own personal speculation.

There are a couple of problems with hate-crime speculation journalism.

Building an entire story around baseless accusations isn’t good journalism because, duh, the accusations could turn out to be wrong.

A reader who checked out the first story but not the second is left with an inaccurate perception of the world—which you would think is the exact opposite of the goal of journalism.

Unless, of course, the true goal of journalism is to advocate in favor of left-liberal causes, even if doing so requires obscuring the truth and perpetuating total falsehoods.

The other problem is that the story is obviously meant to smear the presumed perpetrators of hate crimes:  whites, traditionalists, etc.

Imagine a journalist doing a 50-inch story about a robbery in the inner city where the race of the masked robber is unknown, but the white victim speculates that it was a black teenager, and the journalist then runs with that and throws up all kinds of statistics about black crime, the increase in white victimhood, etc.  And then the robber is then located and turns out to be white.

Of course, you’d see no such thing.

In fact, you would never see that story even if the robber were black.

But I have to think that even liberal editors must have some ethical qualms about how long a journalist is allowed to go with hate-crime speculation stories. Because once the journalist buys into the hate crime speculation, they could interview 500 different transgender activists for a book-length treatment of the subject.

All of which is just another glorious opportunity for them to frolic in the waters of their own political activism.