On Wednesday morning, Indian authorities hanged Mohammed Ajmal Amir Kasab, the lone surviving terrorist in the Mumbai attack of November 26 — 29, 2008. The multi-site raid was mounted by 10 men of the Pakistan Islamist group Lashkar-e-Taiba, killing 166 and injuring more than 300.

Cameras caught Kasab as he prowled the Mumbai train station where 58 were murdered, as part of the attack that included 11 targets, including the iconic Taj Hotel, also pictured below. 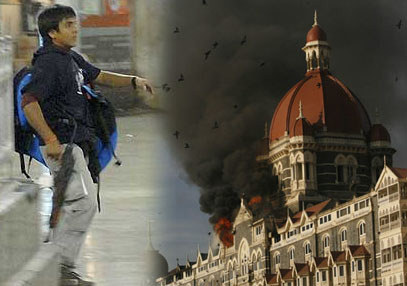 The PBS’ production “Mumbai Massacre” was chilling in its detail:

The New York Times noted the reactions of some family members of the victims:

What They Said: Families of Mumbai Terror Victims React to Gunman’s Execution, November 21, 2012

The relatives of those killed in the November 2008 terror attacks expressed relief over the execution of Ajmal Kasab, the lone surviving gunman, who was hanged by the Indian authorities Wednesday morning in Yerwada jail. Justice has finally been delivered, many said.

Ragini Sharma, the widow of S. K. Sharma, a railway ticket collector: She expressed gratitude to the president and said, though it was delayed, but “we did get justice,” according to Samay Live, a television news station.

“I am happy that it was done secretly, otherwise some human rights people would have opposed it,” said Ms. Sharma, who lost her husband in the terror attacks. [. . .]

It’s good that the victims are satisfied that some justice was achieved by a mass murdering jihadist being hanged. A horrific crime requires the ultimate punishment.

Perhaps the execution will inspire the fearful, politically correct US Army to move forward with the trial of Fort Hood mass murderer Maj Nidal Hasan. The trial for the 2009 crime has been postponed for months over silly arguments about whether Hasan must be shaved to appear in court, with predictions that the “trial could start in 2012?. What’s the holdup here? Get on with it.

One might suspect that the Army fears the obvious conclusion of executing a Muslim, even as the victims’ families would like justice for the massacre in which Hasan killed 13 and wounded 29 others to please Allah.

Back to this week’s execution. . .

India secretly hanged the lone survivor of the Pakistan-based militant squad responsible for a rampage through Mumbai that killed 166 people, sparking celebrations days before the fourth anniversary of the assault on the financial capital.

Pakistan national Mohammad Ajmal Kasab was the enduring image of the bloody assault, which traumatized India and raised fears of copycat attacks on foreign cities. Pictures of the boyish gunman wearing a black T-shirt and toting an AK-47 rifle as he strode through Mumbai’s train station were published around the world.

Kasab was executed on Wednesday morning amid great secrecy, underscoring the political sensitivity of the November 26, 2008, massacre, which still casts a pall over relations between nuclear-armed rivals Pakistan and India.

“All the police officers and personnel who lost their life in the battle against the terrorists have today been served justice,” Home Minister Sushil Kumar Shinde said after Kasab was hanged in a jail in Pune, southeast of Mumbai.

Kasab was charged with 86 offences, including murder and waging war against the Indian state, in a charge-sheet running to more than 11,000 pages.

It was the first time a capital sentence had been carried out in India since 2004. There was celebration on the streets of Mumbai and other cities as news of the execution spread, but militant groups in Pakistan reacted angrily, as did residents of his home village of Faridkot.

People set off fireworks and handed out sweets in Indian cities. Some held up photos of Kasab with a rope noose superimposed over his head.

Attack survivor Vishnu Zende, who was working at Mumbai’s train station where nearly 60 people were killed, said the execution brought it all back.

“When I heard the news of Kasab’s execution today, I remembered those horrifying moments of the attack,” Zende said.

“My eyes were filled with tears.”

An effigy of Kasab was hung by the neck from the entrance gate of the station by a right-wing local party. A crowd of about 30 shouted “Pakistan murdabad” (death to Pakistan) as they beat the effigy, which had shoes hung around its shoulders.

In Pakistan, a senior commander of the Lashkar-e-Taiba (LeT) militant group, which India blames for the assault on Mumbai, called Kasab a hero and said he would inspire more attacks.

“To die like Kasab is the dream of every fighter,” the commander told Reuters by telephone from an undisclosed location.

The Pakistan Taliban said they were shocked by the hanging.

“There is no doubt that it’s very shocking news and a big loss that a Muslim has been hanged on Indian soil,” Taliban spokesman Ihsanullah Ihsan told Reuters.

TICKET TO HEAVEN
Kasab was buried inside the prison where he was hanged, officials said. He was quiet and seemed nervous before the execution, a prison guard told the NDTV network. He prayed and asked if his family had been informed, which they had.

India said it would hand over the body to Pakistan if asked. Talking to Reuters from Faridkot, Kasab’s aunt said she was proud of him and wanted his body back. A schoolmate remembered a boisterous child who loved karate “but never harmed anyone”. Villagers threw stones and slapped around journalists who went to the village in the province of Punjab.

This year, Saudi Arabia extradited an Indian-born militant accused of being a key plotter in the Mumbai attacks. Police say Sayeed Zabiuddin Ansari, also known as Abu Jindal, helped coordinate the attack from a “control room” in the Pakistani city of Karachi and also helped to train the gunmen.

In a video of his interrogation by Indian police, Kasab said his trainers and handlers had assured him prior to the attack that his killing spree was a sure ticket to rewards in heaven.

In August, India’s Supreme Court upheld Kasab’s 2010 death sentence over the attacks. President Pranab Mukherjee rejected his plea for clemency on November 5, although this was not made public until Tuesday night.

The timing of the execution, shortly before a series of state elections, may be beneficial for the government, which opposition leaders accuse of being soft on national security.

“FOOT SOLDIER”
Ten militants arrived on the Mumbai shoreline in a dinghy on November 26, 2008, before splitting into four groups and embarking on a killing spree. They held off elite commandos for up to 60 hours in two luxury hotels and a Jewish centre in the city.

India says Islamabad is failing to act against those behind the raids, including LeT founder Hafiz Saeed, who has a $10 million U.S. bounty on his head. Pakistan admits the attacks were planned on its soil, but denies official involvement.

It says seven suspects are being prosecuted for their role.

“Kasab was a foot soldier, the generals are in Islamabad, in Pakistan, and full justice will be done when they are brought to justice,” Gopalapuram Parthasarathy, a former ambassador to Pakistan, told Reuters.

Improving relations with Pakistan is a keystone of Prime Minister Manmohan Singh’s foreign policy. Singh, who was born in present-day Pakistan when it was still part of British India, has repeatedly postponed visiting the country because of lack of progress on convicting the Mumbai suspects.

However, India and Pakistan’s relations have gradually improved since the attacks, with progress made on trade and economic ties.

Possibly because of the planned execution, India on Tuesday asked Pakistan to postpone a visit this week by Interior Minister Rehman Malik, saying the dates were “not suitable for us”. Malik was due to put the final seal on a deal to ease visa restriction for travelers.

In Pakistan, many said the hanging happened quickly only because of his nationality. People questioned whether Kasab was really guilty, despite the video evidence.

Pakistan was informed beforehand about Kasab’s execution, said a Pakistani foreign ministry official who asked not to be identified. “If all judicial procedures were followed, then the decision is acceptable,” the official said.