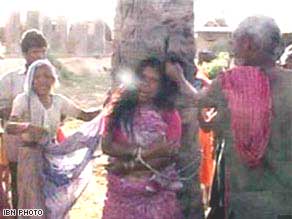 Backward India is certainly not ready for prime time, yet it sees itself as leading the civilized world, going so far as to imagine the future as the Indian Century. Unclear on the concept, shall we say.

The latest evidence is the film of a woman being beaten up by an enthusiastic gaggle of villagers for being a witch, which you can view at the link which includes the text: Indian 'witch' tied to tree, beaten by mob CNN, March 28.

Nishant Tiwari, a police official in northeastern India, said a journalist who filmed the beating called him Thursday to report the incident, which took place in the village of Dumaria in central eastern Bihar state.

He arrived to find the woman tied to a tree, her hair partially cut and her complexion ruddy from being slapped. She had no serious injuries.

"I was appalled at what I saw because people should be more socially responsible than to do this," Tiwari said.

Authorities arrested six people, including the man who admitted to hiring her services as a witch. They were due to appear before a magistrate on Friday.

The Weird India blog reports that a woman was killed recently in a similar incident: Indian villagers 'killed witch'.

The 40-year-old woman, Phool Kunwar, was dragged from her home on Monday night, beaten and burned with a hot iron, police say. [...]

Social activists say such cases are common in India.

More than 2.3 million Indians reside in the United States.