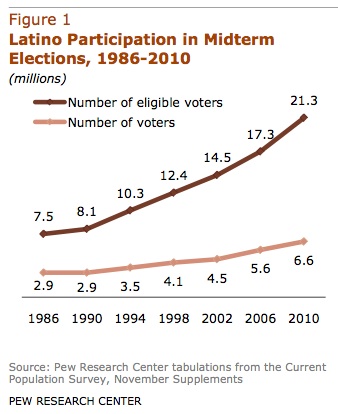 The Pew Hispanic Center has a new report on the increasing number and percentage of latino voters, particularly focusing on the 2010 election.

The numbers keep inching up, because immigration-fueled demography is relentless. Still, the enthusiasm for voting remains less than among other groups, e.g. white voters had 48.6 percent turnout in 2010, while 31.2 percent of hispanic voters showed up at the polls.

More than 6.6 million Latinos voted in last year's election-a record for a midterm-according to an analysis of new Census Bureau data by the Pew Hispanic Center, a project of the Pew Research Center. Latinos also were a larger share of the electorate in 2010 than in any previous midterm election, representing 6.9% of all voters, up from 5.8% in 2006.

Rapid population growth has helped fuel Latinos' increasing electoral participation. According to the Census Bureau, 50.5 million Hispanics were counted by the 2010 Census, up from 35.3 million in 2000. Over the same decade, the number of Latino eligible voters-adults who are U.S. citizens-also increased, from 13.2 million in 2000 to 21.3 million in 2010.

This gap is driven by two demographic factors-youth and non-citizenship. More than one third of Latinos (34.9%) are younger than the voting age of 18. And an additional 22.4% are of voting age, but are not U.S. citizens. As a result, the share of the Latino population eligible to vote is smaller than it is among any other group. Just 42.7% of the nation's Latino population is eligible to vote, while more than three-in-four (77.7%) of whites, two-thirds of blacks (67.2%) and more than half of Asians (52.8%) are eligible to vote.

Differences in voter turnout rates exist among Latino eligible voters. In 2010, Latino college graduates had the highest voter turnout rate (50.3%) among Latino eligible voters, while young Latinos ages 18 to 29 had the lowest (17.6%). Differences in participation rates also exist by country of origin. Nearly half (49.3%) of Cuban origin Latinos voted in 2010 compared with 29.6% of Puerto Rican origin Latinos and 28.7% of Mexican origin Latinos. Similarly, a greater share of naturalized foreign-born Latinos than native born Latinos voted-36.6% versus 29.2%.