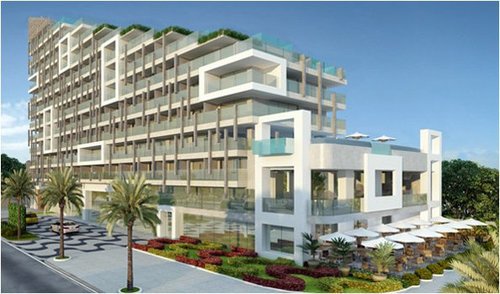 In (Portuguese-Speaking) Brazil, Donald Trump Not So Unpopular

The New York Times has an interesting article about the construction of a Trump hotel (above) in Rio de Janeiro, Brazil.

The Peruvian Nobel laureate Mario Vargas Llosa calls Donald J. Trump  a “racist imbecile.” In Mexico, people are gleefully bashing Trump piñatas  after his caustic remarks about Latino immigrants in the United States. In Guatemala, a liquor company is putting up  of Mr. Trump using a term that, when translated charitably, describes him as a jackass.

Then there is Brazil , where Mr. Trump’s new 171-room stamp on the Rio de Janeiro skyline has generated so little uproar that his business partner feels perfectly comfortable trumpeting his contentious stance on immigration.

“I’m a Latin and I have to say, I didn’t get offended at all with his comments,” said Paulo Figueiredo Filho, 33, a Brazilian real estate mogul and self-described conservative libertarian who is building the lavish new Trump Hotel here.    “I spend a lot of time in the U.S.,” Mr. Figueiredo added, “and I have seen a lot of illegal immigrants that are causing problems, causing trouble in the country, and I actually agree with him.”

“It’s a privilege to have a Trump property in our city,” said Alfredo Lopes, the president of the city’s hotel association and the Rio Convention and Visitors Bureau, emphasizing that he had not paid much attention to the controversies surrounding Mr. Trump in the United States. “This project is a gift to Rio that will serve a very exclusive segment of the market.”

Part of it has to do with how Brazilians see themselves vis-a-vis the rest of Latin America.

But there is a cultural dynamic at work as well. Scholars attribute some of the indifference here about Mr. Trump’s immigration remarks to an entrenched tradition in Portuguese-speaking Brazil of seeing the country as separate from its Spanish-speaking neighbors in Latin America, despite energetic diplomatic efforts in recent decades to forge stronger ties in the region.

Many “Brazilians are not offended by Trump’s remarks concerning Latinos because they don’t think his nasty remarks” refer to them, said Maxine Margolis, an anthropologist at the University of Florida who is a leading authority on Brazilian emigration to the United States. “He is talking about a population they see as ‘the other.’ ”

Oh, so all Latin Americans aren't the same, and don't have the same interests?  Who would have thought?

Well, how about Brazilian emigration to the United States?

Estimates vary widely on the number of Brazilian immigrants in the United States because most of them are thought to be there illegally, but Dr. Margolis placed the number at around 900,000 to one million, close to the figures used by Brazil’s Foreign Affairs Ministry.

While some Brazilian immigrants returned to Brazil in the years after the 2008 financial crisis, a period when Brazil’s economy was booming, Dr. Margolis said it now appeared that Brazilians were moving yet again to the United States as Brazil’s economy remains mired in a multiyear slowdown.

Even if that one million figure is an  undercount, considering Brazil's enormous population, and compared to the enormous Spanish-speaking population in the U.S., the Brazilian population in our country isn't that large.

The article does report some opposition to the hotel, but not precisely over Donald Trump himself and his political views.   The criticism is  for building a luxury hotel in a city marked by great poverty.

By the way, in  next-door Uruguay, which is  a Spanish-speaking country, there is a Trump tower under construction, the article says.    There's not a whole lot of Uruguayan emigration to the United States, though of course there has been some.