In FOREIGN POLICY, A Liberal Is Shocked By The Clear-Eyed View The Chinese Have Of Baltimore 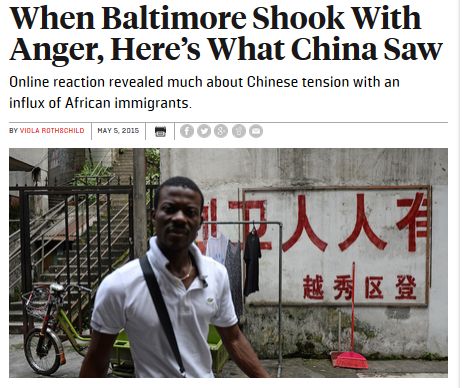 Unlike Bill McGurn and John Perazzo, the Chinese understand what was at work during the Baltimore riots.

In Foreign Policy, a very distressed liberal explained what she heard from her Chinese friends, one of them being that they don’t much care for black immigrants to China:

When Baltimore Shook With Anger, Here’s What China Saw

Several days ago, a Chinese friend and I were discussing the protests in Baltimore that erupted in response to the death of resident Freddie Gray in connection with his April 12 arrest by city police officers, who have since been charged with crimes including manslaughter and murder. My friend said he was first surprised that such a level of civil unrest could occur in the United States. But “when I saw that all the people protesting and getting arrested were black people,” he added, “it made more sense. That would never happen with white people.” (I was unable to convince him otherwise.)

My friend is well educated and is, in most respects, a reasonable person. But like many other Chinese, he has a facile preconceived set of notions about black people that stem from a historical lack of contact. There’s little or no effort here to distinguish between Africans, African-Americans, African-Europeans, Afro-Caribbeans, or recent African migrants to China. They all fall under a homogenous umbrella – hei ren, or “black person” – attended by a variety of sweeping stereotypes, including a proclivity for violence and crime.

After reading a column about the riots in the Chinese media, the writer discloses the nature of the comments:

What I saw online was broadly consistent with my findings in the field. The majority of netizen comments focused on the race of the protestors, not the underlying reasons for the protests, or the fact that they occurred Stateside. And they were nasty. More than one user chalked the behavior up to “black people being black people,” while posts referring to “black devils” were not hard to find. One user complained that black people “lack self-discipline and family values,” adding, “this group is pouring into China. I hope the government will take steps to prevent this.”