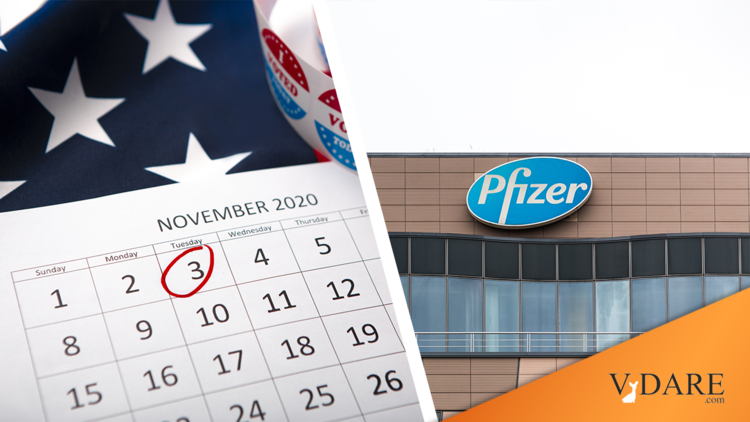 In Defense Of Pfizer: The Growing Democratic Anti-Vaxxer Movement

Earlier: Why Did Pfizer And FDA Agree To Not Release The News Of The Vaccine's Success In October As The Original Protocol Would Have Required?

With Democrats promoting anti-vaxxer tropes in the fall to counter the Trump Administration’s (now successful) strategy of removing roadblocks to ultra-fast vaccine development, Pfizer was in a delicate position.

After two months of Democrats being more likely than Republicans to say they would be vaccinated, about half of all political party groups now say they would get the vaccine. This marks a new low among Democrats and independents, while Republicans’ interest in getting the vaccine has returned to the levels recorded in July, up from their low point in late August. 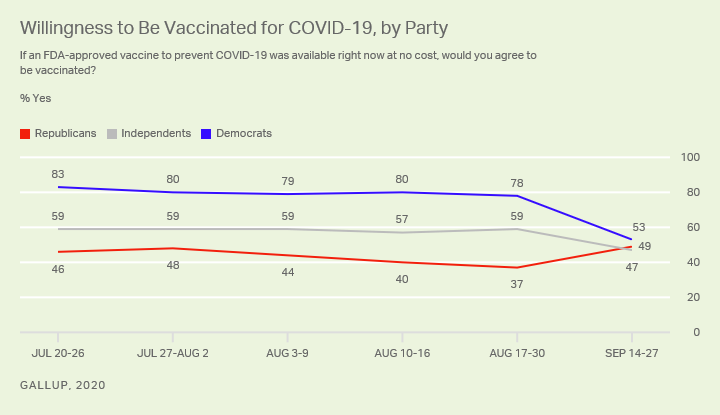 Americans’ willingness to be vaccinated right away if an FDA-approved vaccine to prevent COVID-19 was available among partisans since July. Currently, 53% of Democrats, 49% of Republicans and 47% of independents would get the vaccine. Democrats and independents have become less willing but Republicans have become more willing.

Democrats’ reduced confidence follows President Donald Trump’s Labor Day announcement that a coronavirus vaccine could be ready in October, as well as subsequent news reports stating that Trump is eager to see a vaccine delivered before the election. Trump’s accelerated timeline does not align with that of many government health experts, and this disagreement has raised concerns as to whether a vaccine distributed that soon would be effective and safe.

Democrats may be answering Gallup’s question about getting an FDA-approved vaccine “right now” in the context of Trump’s position, not as a hypothetical scenario. However, a recent CNN poll also found a decline in public willingness to get the vaccine, from 56% in August to 51% in early October, without mentioning a timeframe. That question reads, “If a vaccine to prevent coronavirus infection were widely available at a low cost, would you, personally, try to get that vaccine, or not?”

Taking the two results together, it appears some Americans have lost confidence in the safety of the approval process for the vaccine, and are not merely answering as if a vaccine were literally available “right now.”

Pfizer couldn’t apply for FDA approval of its vaccine until the second half of November because the FDA had mandated two months of safety data. But Pfizer had published its clinical protocol, which included this table on p. 103 laying out four interim analyses of the efficacy (rather than the safety) of the vaccine:

If I recall correctly, the Pfizer CEO had led investors to believe that they would announce results of the interim analyses if the results proved either so good (according to the numbers above) that the trial was a success or was a futile failure, but not necessarily if the results were in the Keep Going middle range.

New virus cases among volunteers came in a little slower than expected because the vaccine was so effective, but at some point it became clear that the case count would soon trigger the first interim analysis and perhaps even the second Before the Election.

But if Pfizer announced the efficacy of its vaccine by November 2, The Establishment would come down on it and its fledgling vaccine like a landslide. The announcement would probably give Trump a tiny boost, but he was so far behind in the polls that it looked like Pfizer would be dealing with the Biden Administration for the next four years in any case.

Not surprisingly, Pfizer appears to have decided to take a knee and run out the clock by shutting down processing of nasal swabs so it could claim to the SEC that it didn’t know it had reached enough cases to trigger the called-for interim analyses.