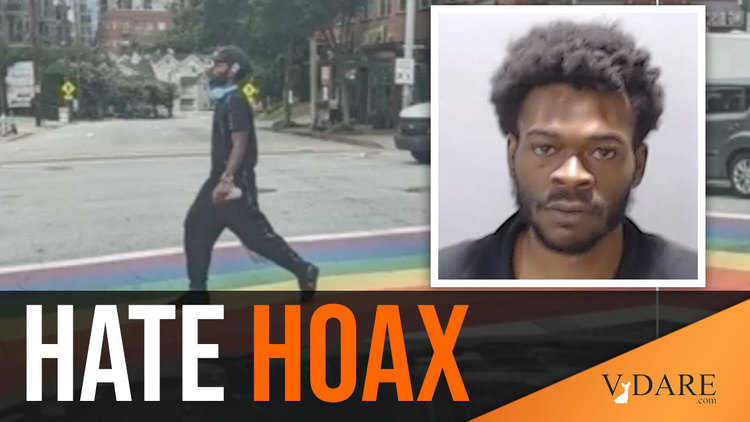 From Breitbart, a case of vandalism that doesn’t fit the Narrative:

A case of vandalism leads to a standoff with the SWAT team.

So they remove the swastika and the guy goes back and puts it back on, also writing a slur. According to a local news source, ”Sampson painted multiple swastikas on the Midtown rainbow crosswalks at 10th St. and Piedmont Avenue.” Is that referring to the first or second incident, or both incidents?

By the way, the Atlanta police department has an ”LGBTQ Liaison Unit” which received the initial report, though it was the Department of Transportation guys who had to remove it.

Sampson is facing three charges of second degree criminal damage to property, one count of criminal trespass and a felony charge of interference with government property, Fox News reported.

What about the SWAT standoff?

Local authorities attempted to arrest Sampson at an apartment on Friday [August 19] around 12:00 p.m., but he would not leave the premises. As a result, Atlanta police SWAT teams were deployed to the scene. Sampson ultimately left the apartment around 5 p.m.

Of course, social media leftists had blamed white supremacists for this vandalism.

The courageous Andy Ngo has some more information about Sampson:

Jonah Sampson, the man accused of vandalizing the Rainbow Crosswalk in Atlanta with swastikas, has an account in which he talks about killing people & how blacks are ”master race”. The vandalism had been blamed on white supremacy.

Jonah Sampson, the man accused of vandalizing the Rainbow Crosswalk in Atlanta with swastikas, has an account in which he talks about killing people & how blacks are the "master race." The vandalism had been blamed on white supremacy. Read my report: https://t.co/mTEZKSalm5 pic.twitter.com/fmp6tNEv3o

More by Ngo on Sampson here.