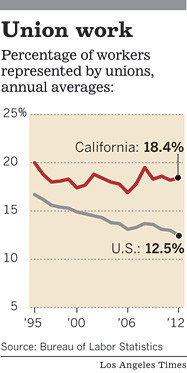 The California model of government, with high taxes and a Democrat-majority legislature and governor, is looking pretty good to top union goons, er labor leaders. While union membership is dropping like a rock in the United States as a whole, organized labor is growing in the once-Golden State, which has had some of the nation’s worst unemployment for the last four years.

A major reason cited for union success is the willingness of Hispanic immigrant workers join up to demand more money and benefits using their “collective voice.” Their aptitude for group action sounds like a great fit for unions — no wonder organized labor has abandoned independent-minded American workers and embraced foreigners who are willing and obedient unionists.

(Since this is an LA Times report, we can assume that the word “immigrants” is used in the liberal style to include illegal aliens.)

Say, why didn’t the foreigners organize unions in their home countries to get better wages?

The latest snapshot of the U.S. working class shows that unions are in trouble, their ranks thinning amid a backlash against organized labor and a still sputtering economy.

But California and a few nearby states in the Southwest are showing a vastly different picture — labor’s ranks are on an upswing. The Golden State’s union organizers signed up more than 100,000 new members last year, while the nation as a whole shed 400,000, according to data released Wednesday.

After working hard to get here, many Latino immigrants demand respect in the workplace and are more willing to join unions in a tough economic environment, organizers say.

“There’s an appetite among these low-wage workers to try and get a collective voice to give themselves opportunity and a middle-class lifestyle,” said Steve Smith, a spokesman for the California Labor Federation.

The nation is paying attention to labor’s ability to gain traction in states such as California.

Strong membership in California could help unions negotiate higher wages, lobby the Legislature and fend off anti-labor attacks that have become common in the Midwest. Unions in once pro-labor states like Wisconsin and Michigan have been put on the defensive by legislation aimed at eroding the bargaining power of public-sector unions.

Labor’s more optimistic proponents say that California could serve as a blueprint for unions across the country as they seek to stem membership declines. The trend comes amid forecasts that the Latino population in the U.S. is likely to double in two decades.

“This has a lot to do with the changing demographics of the workforce in these states,” said Ruben Garcia, a labor law professor at the University of Nevada Las Vegas. “The big campaigns in the carwash industry in L.A., the janitors in Houston and the people who work on the Strip here tend to be an immigrant Latino workforce that’s willing to stand up at the workplace, sometimes with great risks.”

With the economy still shaky, many California workers are also looking for more job security.
Jackie McKay, 48, is one of the new crop of California union members. A nurse in the intensive-care unit at Community Hospital Long Beach, McKay said she and colleagues decided to try to organize after a new company took over the hospital and nurses weren’t comfortable with the way they were being treated.

“We were sort of seeking out someone that we felt was on our side,” she said. “We needed some backup.”

The Long Beach nurses voted 94 to 30 to unionize in December.

“California is doing far better than most other states and far better than the national trend” in union membership, said John Logan, a professor of labor and employment at San Francisco State University. “Unions have had both dynamic organizing efforts and very effective political influence.”

Employees are often hesitant to do anything risky at work when the economy is bad and jobs are scarce. Organizers say they were successful because they harnessed frustration with growing nationwide inequality to engage members during the recession.

“To be successful in organizing unions in the United States in 2013, it’s not enough just to appeal to workers on the basis of their own individual problems,” said David Johnson, organizing director of the California Nurses Assn., which added five new hospitals last year. “There has to be a broader vision set forth so that people see unions and the labor movement as an answer to the corporate domination and the Wall Street greed that has devastated our country.”

Still, the labor movement faces significant challenges in applying moderate successes in California to the rest of the country.

Michigan and Indiana both became “right to work” states last year, meaning unions can’t collect dues as a condition of employment. Legislators in Wisconsin and Ohio recently supported bills restricting the bargaining rights of public-sector unions, though the law in Ohio was reversed by referendum.

Those actions were reflected in the numbers put out by the Bureau of Labor Statistics. The percentage of people represented by unions last year in Wisconsin fell to 12%, from 14.1% in 2011, while Indiana experienced a significant drop in union membership, to 10% of the workforce, from 12.4% the previous year.

Union membership fell fairly consistently in Rust Belt states as manufacturing jobs, once a labor stronghold, were sent overseas. The decline in unionized manufacturing isn’t likely to shift as companies make efforts to return manufacturing to the United States. Auto companies, for instance, have built new plants in the South, an area traditionally resistant to unionization.

Unions don’t have the same appeal to workers who change jobs frequently and think of themselves as independent workers, said Michael Lotito, a partner at the labor law firm Littler Mendelson.

“Unions are really struggling to find a message that resonates with individuals such as it did with my father’s generation,” he said.

But demographic shifts can be only positive for unions in the next few years, said Harley Shaiken, a labor professor at UC Berkeley. Labor has built new alliances and is going into a new, proactive phase, he said.

“Reports of labor’s death have been greatly exaggerated,” he said.