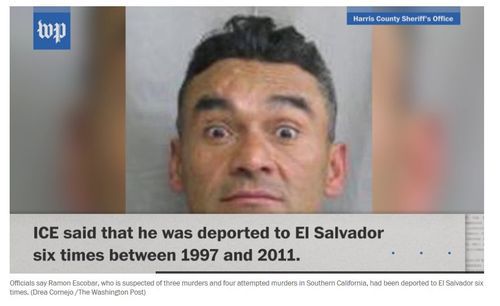 He's also suspect in the "missing persons" case (as in, no one has seen them alive recently) involving his own aunt and uncle in Texas:

Ramon Escobar, nephew of missing persons Dina and Rogelio Escobar, was arrested in Santa Monica, California, yesterday. He's a person of interest in their disappearance in Houston. Our investigators want to speak with him. No other information at this time. pic.twitter.com/sUpD7oePUf

I suppose the fact that he had an aunt and uncle in Texas—before they went missing—is why the Chicago Sun Times is referring to him as a "Texas Man".

But back to the Washington Post's report on his immigration status:

Late Tuesday, U.S. Immigration and Customs Enforcement said in a statement to The Washington Post that Escobar, an “unlawfully present Salvadoran national,” was “ordered removed from the U.S. by a federal immigration judge in February 1988 and had been removed to El Salvador six times between 1997 and 2011.” Escobar has six felony convictions for burglary and illegal reentry, according to ICE.

After his most recent removal, Escobar illegally reentered the country and filed an appeal of his immigration case in June 2016, according to ICE. The court granted the appeal and ICE released Escobar from custody last year.

Following the news of Escobar’s arrest, ICE announced it filed a detainer against him, meaning they would like to take him into custody “for immigration removal proceedings” whenever another law enforcement agency releases him.

Please remember that the Federal immigration judge who released him is not a real judge, but an Executive Branch employee, and can be fired. And should be, even if Escobar hadn't killed anyone—letting a guy with that record appeal while at large instead of in custody is insane.