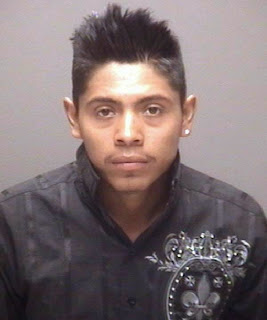 Mass murdering "immigrant," Juan Garcia Ahuezoteco, or whoever he was 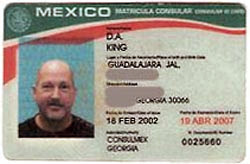 Above and below: Two of D.A. King's Matricula Consular cards

I thank A Texas Reader for this article.

When people think of “Immigrant Mass Murder Syndrome,” they don’t usually consider this sort of slaughter an example, but they should start.

If you kill people while driving drunk, recklessly (speeding, running red lights or stop signs, etc.), or while fleeing the police, it’s not an accident, according to American law, which has yet to be repealed and replaced by Mexican law.

Illegal alien Juan Garcia Ahuezoteco was allegedly from Mexico. I say allegedly, because the appended news story reports his nationality based on his being “identified by his Mexico [sic] ID card.” Since he didn’t have a Mexican passport on his person, that “ID card” would be a “Matricula Consular,” which is a fraudulent form of ID issued by Mexican consulates to anyone willing to pay the fee. An “MC” guarantees that its bearer is an illegal alien. A legitimate immigrant has legitimate documents—a passport from his homeland, and an American visa, and/or work authorization, etc.

The exceptions to the rule are those American immigration patriots who have bought MCs at Mexican consulates, to prove that they are phony. The consulates do not require purchasers to provide any secure ID, or to be fingerprinted and checked against computer databases. Immigration reform activist D.A. King has purchased multiple MC cards using different names.

With that in mind, we cannot be sure what country Ahuezoteco was from, or what his true identity was. The name he used suggests he was an Indian, and a friend claimed that Ahuezoteco and the alleged cousin he killed were both from Guerrero, Mexico, but again, we have no idea who he really was, or where he was from. All we know is that he entered America illegally, committed many crimes here, and murdered at least five people that we know of. Oh yeah, and that “He was a good guy.”

You wouldn't say that if it was your family members that were killed, now would you? Do you honestly believe that catching someone that was 'swerving' and not having headlights on at 8:20pm was worth all this?

That's a cheap shot, on your part.

Someone who is guilty only of "'swerving' and not having headlights on" does not flee the police. His action telegraphed to the cops that he was in trouble for more than that. Since the cops' telepathic mind-reading equipment was in the shop that day getting repaired, they were unable to determine that the perp was "only" wanted on a felony DWI warrant, rather than for being a serial killer.

In fact, the cops weren’t acting recklessly. The killer was driving at up to 100 MPH, while talking on his cell phone to his pregnant girlfriend, as we learn from the only mainstream media outlet that would tell the story. Meanwhile, the only pursuing police car had lost sight of Ahuezoteco’s vehicle.

Ahuezoteco's girlfriend, who says she is pregnant with his child, says she was on the phone with the suspect as he fled from police.

"He was freaking out," the woman told Eyewitness News.

She says he was afraid of getting deported and told her he loved her before the crash. [Minute-and-half car chase leaves 6 people dead after wreck in League City by Steve Campion, KTRK-ABC, Monday, August 11, 2014.]

As an ABC reader pointed out, if the authorities had done their job, as an illegal alien, Ahuezoteco would have been taken into custody and never have been released, when they caught him driving drunk the first time, let alone the second time.

Note that two reporters and presumably at least one editor worked on the following story, yet it is full of errors. What is going on at Houston’s KPRC News? Then again, the folks at KPRC got the important things right, like refusing to report that the killer was an illegal alien, and using the headline to insinuate that the real killers were the police. Promoting racial socialism is all that matters; English grammar is for gringos.

Six people were killed in League City Sunday night when a speeding SUV driver slammed into another vehicle while attempting to flee Dickinson police, authorities said.

According to police, the chase began when an officer tried pulling over a Dodge Durango in Dickinson. The driver, 23-year-old Juan Garcia Ahuezoteco, refused to stop and led police on a high-speed chase.

Less than two minutes later, police said Ahuezoteco ran through a stop sign and crashed into a Honda Accord at the intersection of Ohio Avenue and FM 646 around 8:30 p.m. The Accord was carrying four [sic] members of the Guerrero family.

"It was a family of four [sic]; a mother, father and child and then another male relative. And they were traveling as any other law-abiding citizen on a public roadway of course not expecting anything like this as they were driving,” said Reagan Pena, with the League City Police Department.

Dickinson police say Ahuezoteco never even tapped his brakes as he flew into the intersection and killed a family of four. The accident left two teen boys [sic] without a mother and father.

"Then just last week those boys were in my house eathing [sic] popcorn. The brother that survived and the brother that's been called home. They were just here. I gave them a ride home," said neighbor Debbie Burek.

[In this updated video, Burek blames the police for chasing a criminal. Yeah, the cops murdered five people. And if the cops follow Bill Bratton’s advice and stop chasing criminals, and the criminals go on to murder people, will the Debbie Bureks understand? Not bloody likely.]

Neighbors of the the [sic] Guerrero's [sic] say they were such a warm and loving family. One of their two surviving sons tweeted out a picture of his family after officers called to tell him about the crash.

"He went home to an empty home," Burek said.

Family and friends gathered at a relative's home, all set about the grim task of planning four funerals while caring for the family's 19- and 16-year-old sons who are now orphans.

"It's not going to be easy for a couple of months, but we're going to get through it," said cousin of the victims, Miguel Ortega.

Dickinson police say 41-year-old Rafael Guerrero, his wife, 38-year-old Alejandra, their 15-year-old son and an uncle, 25-year-old Gilberto Ortega [the wife’s brother], all died when a Dodge Durango broadsided their Honda Accord at the intersection of FM 646 and Ohio in League City.

The crash happened in League City, but began [sic] in neighboring Dickinson. Police say they tried to stop Ahuezoteco, but he took off. He slammed into the family of four, while trying to get away from police.

"This is the type of accident you don't hope to see and don't see often in law enforcement," said League City Police Officer Reagan Pena.

Ahuezoteco and his passenger, cousin Alejandro Molina, also died. Until recently both lived at a League City apartment complex where word of the crash spread quickly.

"I didn't know what happened until the neighbors told me this morning and when they told me it was a green Durango truck, I knew definitely it was him," said friend Jesus Rodriguez.

He said the pair was from Guerrero, Mexico, and worked for a landscaping company. Rodriguez says he became close with Molina.

[Yeah, good guy, he only murdered five people. Must be a Mexican thing that Americans just can’t understand.]

Police said Ahuezoteco had an outstanding felony warrant for driving while intoxicated. Court records show his bond had been revoked on a pending DWI charge.

League City police say after the crash Ahuezoteco was identified by his Mexico ID card and by a family member. [How could they determine that the person identifying him was a family member? Based on the “family member’s” fraudulent ID?]

Police say at this time there were no obvious signs he had been drinking when he fled from police. [In other words, he may have been legally drunk, but didn’t stink up the joint.]

Power crews were called to the scene to repair several downed power lines.

Officials said close to 100 households lost power when the lines were damaged in the crash.