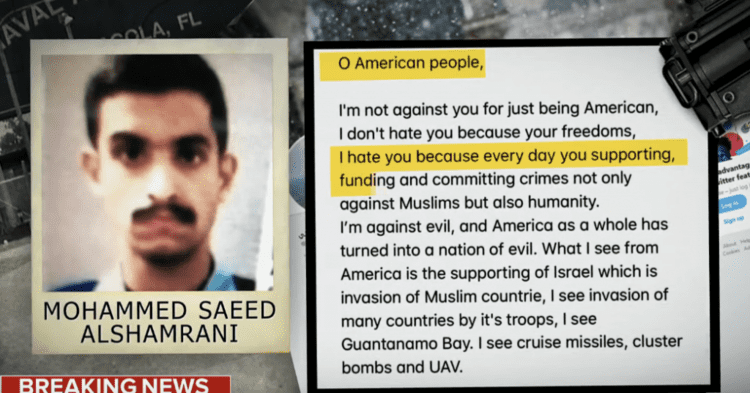 Saudi Air Force trainee condemned US as ‘nation of evil’ in hate-fueled Twitter manifesto just hours before he killed three and injured eight at Pensacola naval base – as six others are arrested, including three who FILMED the attack
Shooting took place on base early Friday morning, sparking a lockdown
Sources identified the suspected gunman as Saudi Air Force aviation student Mohammed Saeed Alshamrani
Alshamrani penned a hate-fueled manifesto on Twitter just hours before the attack, according to an intelligence group who tracked down his account
The manifesto condemned the United States as a ‘nation of evil’ who ‘support, fund and commit crimes against Muslims’
The Twitter account – now suspended – is said to also feature anti-Israel posts and a quote from al-Qaeda leader Osama bin Laden
On Friday evening, six other Saudi nationals were detained for questioning
It’s reported that three of them filmed the shooting as it happened
Rep Matt Gaetz, a Republican representing Pensacola, called the shooting ‘an act of terrorism’
President Trump tweeted that King Salman told him ‘the Saudi people are greatly angered by the barbaric actions of the shooter…’
By ANDREW COURT and SNEJANA FARBEROV FOR DAILYMAIL.COM and AFP

… Alshamrani was a second lieutenant attending the aviation school at the base. The Pentagon say his training with the US military began in August 2016, and was due to finish in August 2020. …