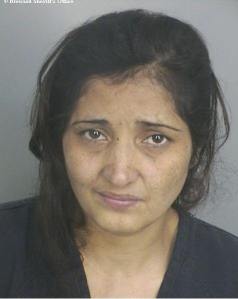 Daughters don’t fare very well in the Arab world, and that fact doesn’t change just because the Muslims relocate to the United States, as shown by the incidence to honor killing here in this country.

Even low-level disobedience may put a girl in the hospital after a parental beating, as happened in Arizona to an Iraqi teen.

The latest affront to American values is the Yemeni family who burned their teenager’s arms with a hot knife for communicating with a male not chosen by the parents. And she didn’t want to marry her cousin, as the parents had decreed. The mother, Sahar Thabit (pictured), did the actual burning.

“Spare the branding iron, spoil the child!” — that’s the Muslim motto, at least in the Thabit family.

Why does Washington continue to admit these horrible people as immigrants when their misogynist culture is objectionable to our values? Muslim immigration is wrong is all possible ways.

A Middle Eastern South Florida resident was arrested Friday for allegedly burning her teenage daughter with a heated knife.

Authorities said 35-year-old Sahar Thabit, who was born in Yemen, was punishing her 17-year-old daughter for befriending and talking to a boy online in defiance of her family, who want her to marry her cousin. She has been charged with three counts of child abuse causing grave bodily harm.

“This was pretty bad, because there were burn marks on both arms,” said Somy Ali, president of No More Tears, a non-profit organization that assists victims of domestic violence. Ali said the victim had three identical burn marks on each forearm.

Hollywood Police said Thabit burned her daughter in early January. Officials at South Broward High School became aware of the victim’s burns when the teenager’s classmate told the assistant principal her parents were furious when they found out about their daughter’s online friendship.

School resource officers contacted police detectives. A report filed by Hollywood Police Detective Chris Christianson reads, “The child advised that both of her parents had knowledge of the incident, but it was the mother who actually placed the knife on her arm.” The report reveals that “the victim told … her parents were upset because she did not want to marry her cousin in an arranged marriage.”

The victim’s grandfather insisted the burns were accidental. “She burned herself because we have an oven,” said Ali Thabit.

When 7News pointed out her granddaughter’s burns were identical, he replied, “I swear to God, I didn’t see anything.”

Police brought the victim to No More Tears, which specializes in domestic violence cases involving Middle Eastern women. Somy Ali said the teenager did not want her mother to be blamed. “I’ve dealt with it myself when I was a teenager, I’ve been there,” Ali said. “She felt bad about bringing her mother and dad to court. She was not intending for her friend, whom she confided in, to tell the authorities,” she continued.

Sahar Thabit was released Saturday after posting $22,500 bond but has been ordered to stay away from her daughter.