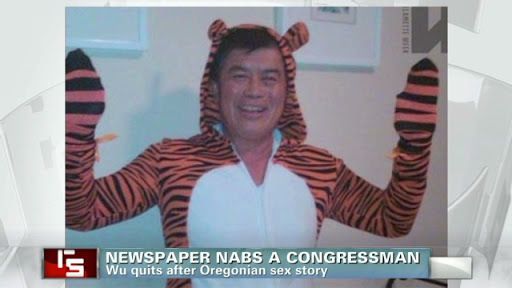 Well, you didn’t read that headline, although Wu (D-Ore) has indeed resigned after some sort of interaction with the 18-year old [i.e. legal] daughter of a donor. And he is indeed an immigrant, born in Taiwan in 1955 and coming to the U.S. with his parents in 1961. (Click here for Michelle Malkin’s view; here for Wu’s appearance in a John Derbyshire-Norm Matloff colloquy).

This is a crude measure (the google Wu-immigrant search in particular seems choked with junk). But, nevertheless, it is evidence of the Main Stream Media’s priorities. There are circumstances in which Wu’s immigrant status must be whooped up, And there are others in which it must go down the memory hole.

Indeed, poor Wu tried, vainly, to push the immigrant button in his resignation statement (resulting in most of the hits on “immigrant”): “Rare is the nation in which an immigrant child can become a national political figure.”

(Bunk, of course. It’s common throughout the immigration-impacted First World: Canada—needless to say!—has even had a Haitian immigrant Governor-General, who was also a dual citizen of France [!!] and linked to Quebec separatism [!!!]).

Sexual harrassment, like mass murder, is not a job that Americans won’t do. I don’t really know what the significance of Wu’s immigrant status is. I do know, however, that it is being suppressed for a reason.

For the record, although Wu is regularly described as a “moderate Democrat”, NumbersUSA ranks his Career Record on immigration patriotism as an “F”.