Media interest in the mess following the catastrophic Colorado floods has dribbled off to near zero, but the Associated Press is concerned that illegal aliens are suffering unduly because of insufficient benefits coming from the government. The AP story includes lots of yucko pictures of trailers turned to soggy messes. 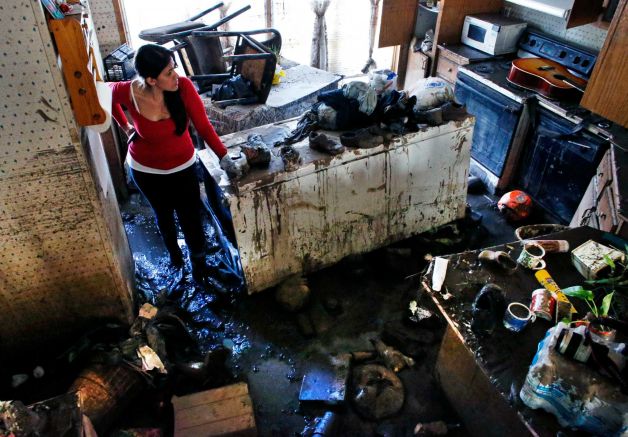 The story notes how the foreigners have received private donations of “amazing” generosity. But the illegals feel entitled just because they live there: this is America and they want maximum free stuff.

One illegal person says, “We were flooded like everyone else. We suffered the same damage. “We pay taxes, we work here. We’re not getting something for free.”

So pony up, citizen taxpayers. Lawbreaking foreigners want more free stuff. They could relocate to Mexico where business is booming, but that would be too much trouble apparently.

EVANS, Colo. (AP) — Immigrants living in the U.S. illegally returned to their mobile home parks in flood-ravaged Colorado to find that there was little left to salvage — not the water-damaged cars, not the old family pictures and not the sheds carried away by the rushing waters.

The destruction, however, was only the beginning of what’s been a nightmarish two weeks. They didn’t have flood insurance. And because they are not citizens or legal residents — and don’t have family members who are — they won’t get the federal government’s help.

“They say that faith and hope die last,” said Juan Partida, 40, a dairy worker who along with his wife Mari, who is pregnant, do not qualify for federal emergency aid because they are in the country illegally. “We need to have faith and hope that we’ll get help.”

How quickly they can rebuild their lives, relying largely on local government and nonprofit organizations, will have long-term ramifications on the Weld County industries that depend on their labor, from meatpacking plants and farms to construction and hotels.

“They’re out of their homes, and a lot of them have lost their vehicles in this, they’re impacted. So the economy is going to be impacted,” said Lyle Achziger, mayor of Evans, a city on the northern plains whose population of 19,500 is 43 percent Latino.

Achziger said officials responding to the disaster have been learning about the immigrants’ importance to the region’s economy. He said the city hopes to get people help by getting them to register with the city, county and other volunteer aid organizations.

“We have told them that immigration status is not our focus. And I will repeat that again, that is not our focus. Our focus is getting people out of the cold, getting a roof over their head and getting them a warm meal,” he said.

“They’re certainly a critical element of our team,” Bruett said.

The waters that ripped through the Evans mobile home park the morning of Sept. 13 gave residents only minutes to get out. Many left with just the clothes they were wearing.

In Partida’s trailer, he and his wife had toys and clothes from their boys, 8 and 3, who died in a car accident nearly a year ago with their aunt and uncle. “Not being able to get none of those things out, for me that’s what’s saddens me the most,” he said.

In all, there were about 150 homes. Every single one is marked with an orange X to signify it’s uninhabitable.

Many of the mobile park residents came from Mexico, and those in the country illegally will not get help from the Federal Emergency Management Agency unless they have U.S. citizen children or a family member who is a legal resident.

For those who do qualify for FEMA aid, immigrant advocates are concerned there’s a lack of Spanish-language speakers to help families navigate the system.

When a FEMA housing inspector visited Sofia Mendez, 59, the meeting left her confused about what help she would get, she said. Mendez, who is a naturalized citizen, started buying her $29,000 trailer in Evans about a year ago.

FEMA insists it has enough Spanish-speaking workers in the field helping immigrants. Spokesman Daniel Llargues said the agency is committed to “making sure that they’re getting the information they need to recover” and that Spanish speakers have been knocking on doors and stationed at disaster assistance centers.

At her home this week, Mendez walked slowly with a cane and wore knee-high plastic boots needed to slog through the heavy mud. Her voice wavered as she pointed to the things she lost.

“This is a picture of my granddaughter,” she said, pointing to a frame streaked with so much mud it was difficult to make out the face. Pointing to blue tiles on her kitchen counter, she said, “I put those there.”

For now, Mendez and her 28-year-old son, who is disabled, are staying with a friend.

In nearby Milliken, a small town tucked amid farm fields, mobile homes that were near the Big Thompson and Little Thompson rivers faced similar devastation as Evans. Latinos account for 28 percent of Milliken’s 5,800 residents.

Forty-five trailers suffered varying degrees of damage, said Milliken Mayor Milt Tokunaga. “It doesn’t matter if it’s an undocumented person or not as far as the impact because they pay taxes here, there’s a local carniceria, they do shopping here,” he said.

So far, many families have been relying on friends and relatives for housing, and volunteer organizations like the Red Cross, churches, and the Salvation Army for clothing, food and other supplies. There have also been anonymous donations. Someone paid for hotel lodging for 20 families until the end of the month.

“All of them have been amazing to the families, but it is on a temporary basis, day-by-day. Like you can sleep here for tonight, here’s food for today,” Milliken resident Allison MacDougall told FEMA officials at a town meeting this week.

The officials told her they wished there was another way, but that all they could do was refer them to volunteer aid organizations.

“We were flooded like everyone else. We suffered the same damage,” said Norma Miramontes, 42, who along with her husband, a construction worker, is in the U.S. illegally.

They may be eligible for federal aid because her mother, who lives with them, is a legal resident, but they haven’t heard back from FEMA. “We pay taxes, we work here,” Miramontes said. “We’re not getting something for free.”