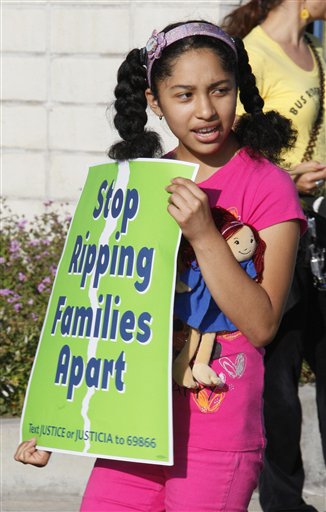 In case there was ever any doubt that the open-borders gang consistently acts in bad faith, consider the issue of Secure Communities. Under that program, local officials fingerprint persons already in jail and check the prints with a Washington database to see whether the prisoner is an illegal alien.

No, in the minds of La Raza and similar fifth columnists. They would rather allow dangerous foreign criminals to stay (who often prey upon Hispanics) than support public safety for all.

The arguably most egregious photo of an artful collection of propaganda shots included with the AP story was of “Jaquelin Minero, 12? (shown) — holding a sign and clutching a doll.

How many 12-year-olds carry around dolls? Those schoolgirl braids are suspicious as well — is that even real hair? Normally braids thin out toward the end. In any case, the picture is obviously posed for media effect.

Does the liberal dinosaur press mind being played for a fool by Raza schemers, or is it a willing participant in carrying the agenda of one of its favorite “victim” groups?

Immigrants who say they were hauled into jail for selling ice cream without a permit and for reporting being the victim of domestic violence had one message for a federal government task force assigned to review an information-sharing effort that gives immigration authorities access to the fingerprints of arrestees.

More than 200 people, many wearing signs reading “Terminate Secure Communities” and carrying flags from countries including Mexico and Brazil, packed a conference room in Los Angeles Monday night to recount their experiences with a program they say is making immigrants reluctant to report crime to police out of fear of getting deported.

“Every day I live the nightmare of this program,” said Blanca Perez, 38, who said she was arrested in February for street vending without a permit. “Now I am facing deportation for the simple act of selling ice cream in the street.”

The meeting was one of the first public discussions of the so-called Secure Communities program since Immigration and Customs Enforcement on Aug. 5 terminated agreements signed with states to jumpstart the effort and said that state approval isn’t required to share fingerprints.

The program touted by immigration authorities as an information-sharing effort has become a headache for the Obama administration, which has plowed ahead with it despite vocal opposition from Latino and immigrant rights groups the president counts on for support.

Immigrant advocates say the program lands immigrants arrested for investigation of minor violations in detention and erodes their trust in police. They have also criticized the administration for giving the impression that local governments could choose whether to participate when it is in fact mandatory.

States including Illinois and Massachusetts had decided to opt out of the program, only to be told that they couldn’t.

At the at-times boisterous meeting in Los Angeles, several dozen people spoke out against Secure Communities — and the bulk of the crowd walked out halfway in protest after a speaker challenged the two task force members leading the session to resign. But a handful of people gave the program praise, saying more, not less, immigration enforcement is needed.

“Contrary to what you have heard, Secure Communities does not seek out hardworking, law abiding immigrants for removal,” said Anna Pembedjian, public safety deputy for Los Angeles County Supervisor Michael Antonovich. “Rather, it seeks out those who prey on them and others in our community,”

On Monday, immigrant rights groups urged members of the task force to call on ICE to end the program and questioned whether any real change would come from the meetings held last week in Dallas and scheduled this week in Los Angeles and Chicago.

Immigrant advocates are planning to hold protests Tuesday against Secure Communities in cities across the country.

“We have the opportunity to give voice to you in those halls of government where in the past, in reality we haven’t had it,” he told the smaller crowd that remained after the walkout in Spanish. “If we leave now, the work will continue, and they will make recommendations without our voice.”

The Department of Homeland Security said in a statement that it has recently developed additional training for local law enforcement along with a new policy to protect domestic violence victims. It also said it created the task force to make recommendations for other changes, recognizing “that there is room for improvement in the operation of the program.”

ICE is currently running the program in 44 states and plans to achieve nationwide coverage in 2013.

Local law enforcement agencies routinely send fingerprints to the FBI for criminal background checks when an individual is arrested. Under Secure Communities, the FBI shares the fingerprints with Homeland Security to look for potentially deportable immigrants.

An ongoing source of debate is who is getting identified through this fingerprint sharing. Since 2008, about 121,000 immigrants have been deported after being flagged under Secure Communities, ICE statistics show.

That has led some immigrant advocates to clamor for changes, such as screening people after they are convicted of a crime instead of when they are arrested. Groups in favor of stricter limits on immigration counter that it’s not feasible to wait for a conviction and the sole opportunity for consistent screening is during the booking process.