How does it happen that an illegal alien can drive something as dangerous as an 18-wheel tractor trailer on America's highways? Particularly when he does not speak English and has a poor safety record... 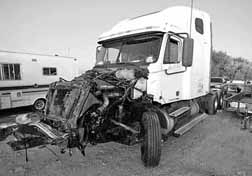 Oliveira plowed his rig into 13 vehicles that had slowed for a well marked road construction project. The car that contained Arturo and Estrellita Cortez and their 8-year-old granddaughter Kayla was dragged for 100 feet. All within were killed, as was Robert Allen Newsted Jr. in another car, whose infant son survived in a carseat.

Kayla's father, Arturo Cortez Jr., was in the courtroom for Oliveira's sentencing.

"I have lost both my parents and my only child," he said through tears. "They were the three most important people in my life. I was never given a chance to say goodbye to them.

"The truck he was driving became a weapon. Because of that I will never see my parents or my child ever again."

Cortez and his sister asked for the maximum sentence, which would have put Oliveira behind bars for 14 to 35 years. Cortez said he believed Oliveira chose to violate safety laws. Four to 24 Years: Trucker gets sent to prison, Las Vegas Review-Journal 7/25/07]

A tougher sentence certainly seems indicated. Oliveira blamed brake failure, but a post-accident inspection by an expert with the Nevada Highway Patrol found the brakes to be "essentially fine." Oliveira had falsified his driving records. He had been cited several times for safety violations. He did not speak English. Yet the illegal alien apparently was licensed in California and allowed to continue driving.