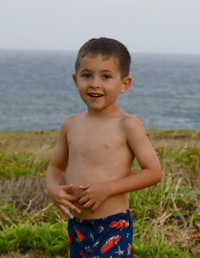 Four-year-old Christopher “Buddy” Rowe was killed last August as he walked with his mom and two sisters on the way to soccer practice. He lagged a bit behind the others and was struck in the marked crosswalk and flew 80 feet when hit by illegal alien Marcos Lopez Garcia.

The illegal then sped off and switched cars to evade authorities, but was seen by a concerned citizen, Leroy Flach, who contacted police. Otherwise the killer might have successfully reached Mexico, as he was planning, and thereby escaped justice entirely. Garcia was arrested later on the day of the crash.

The AP story below about Friday’s sentencing as well as the local Santa Rosa Democrat both soft-pedaled the harsh illegal alien aspect of the crime, namely that it might have been prevented with proper law enforcement strategies. Neither mentioned that Garcia had been arrested twice before for unlicensed driving but was released rather than deported. As the San Francisco Chronicle noted (Boy, 4, killed in Santa Rosa hit-run; suspect held, August 19, 2011):

Garcia does not have a driver’s license and has two previous arrests for driving without a license. The most recent incident happened just five days before the crash, when he was told not to drive until a court appearance in October, Celli said. 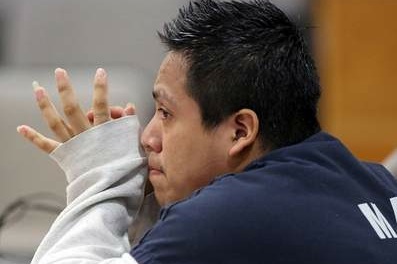 Four years seems a terribly short sentence for killing a little boy, particularly when the perp is an illegal alien.

The family has a memorial website, Christopher “Buddy” Rowe.

SANTA ROSA — At an emotional hearing, a Sonoma County Superior Court judge sentenced a Santa Rosa man this morning to four years in prison for the felony hit-and-run death of a 4-year-old boy in a crosswalk last August.

Marcos Lopez-Garcia, 23, was also sentenced by Judge Kenneth Gnoss to one year for misdemeanor vehicular manslaughter without gross negligence and six months for misdemeanor driving without a license, but will serve those sentences concurrent to the four-year term.

Garcia pleaded guilty to all three charges in May after striking Christopher “Buddy” Rowe in the crosswalk of West Ninth Street and Rockwell Place in Santa Rosa on Aug. 18, 2011, and then fleeing the scene. Rowe died 13 hours later at Children’s Hospital and Research Center in Oakland.

Garcia was in the country illegally and will be deported after he serves his term, his attorney Walter Rubenstein said.

Rowe’s bereaved parents, Jim and Michelle Rowe, asked the judge to impose the maximum term of five and a half years that Garcia faced.

Gnoss acknowledged that as a parent, he would like the stiffer term, but said he already imposed the maximum term for the hit-and-run charge and was bound by rules of the court to impose the concurrent terms.

At today’s sentencing, Jim Rowe called Garcia a coward for fleeing the accident that killed his only son. Both he and Deputy District Attorney Daniel Cohan said Garcia was not sorry for what he did, but was sorry only because he got caught.

“This was reckless, plain, cold-blooded murder,” Rowe said. Garcia was arrested after Santa Rosa police broadcast a description of his car on the police radio frequency following the collision, and Santa Rosa resident Leroy Flach heard it and drove to nearby Finley Park where he thought the driver might have fled.

Flach told police he saw the driver removing a decal from the rear of the car, and that the man was then picked up by a woman driving a silver Volvo, police Sgt. Rich Celli said.

Flach followed the Volvo and provided its license plate number to police, who found the car in the 500 block of Sonoma Avenue around 7:50 p.m. on Aug. 18.

Garcia gave police information that confirmed his involvement in the hit-and-run and he was arrested and booked into Sonoma County Jail. Rowe today recalled his mud-puddle-loving son as “all-boy”, but also as a sensitive boy who played with dolls and “had no trouble with (the color) pink.”

He said he expected his son to become a Navy Seal or a police officer dedicated to the safety of others.

Cohan said Garcia was “blame-shifting” when he claimed the sun was in his eyes that day and that a truck cut him off. If that were true, Garcia should have been driving slower, the prosecutor said.

Regarding the defense’s suggestion that Michelle Rowe should have been closer to her son and holding his hand in the crosswalk, Cohan said that would have resulted in two victims.

Cohan said Garcia wrote a letter to the court, not to the family, and said it “is missing three key words … ‘I am sorry.’”

Michelle Rowe recalled the horror of the collision that threw her son 80 feet. She said she prayed for her husband to get to the scene in time to say goodbye to their son.

Michelle Rowe said she held her son in her arms at the hospital and sang the songs she and her husband sang to him when they put him to bed. “I stayed with him and held him in my arms for five hours as he became cold and the coroner came,” she said.

“It is impossible to convey the level of anguish I felt,” she told the court.

Garcia sat with his hands clasped on his forehead and appeared to be wiping away tears after the showing of a video about “Buddy” Rowe’s short life.

Rubenstein said his client “feels absolutely horrible about what happened,” and said Garcia always came to tears when he discussed the case with him.

“He wants a just and fair punishment,” Rubenstein told the judge. In pronouncing his sentence, Gnoss noted Garcia had been stopped for driving without a license six days before the collision, and was trying to raise money from friends after it so he could leave the country.

Garcia’s behavior in effect sentenced the Rowe family to a life-sentence without their son, Gnoss said.