In Newark, the fifth trial of the horrific Newark schoolyard killings of three local college students has wrapped up with convictions on many charges. Peruvian illegal alien Jose Carranza was found guilty on felony murder and robbery.

Carranza (pictured below) was a dangerous criminal with a rap sheet of violent crimes, but he was not deported even after some alarming activities: 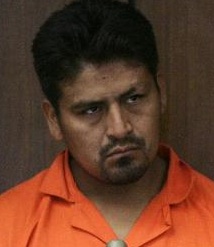 [. . .] FOX News has learned Carranza, who has a fake Social Security number, had been arrested on charges of raping a 5-year-old girl and then threatening the child and her parents. In that case he faced a 31-count indictment.

In another, he was arrested on assault charges stemming from a bar fight.

How can an illegal alien accused of child rape be released from jail to endanger the public? Carranza’s trail from violence against a child to the deaths of innocents was entirely predictable. The terrible crimes on the Newark schoolyard could have been prevented by normal public safety measures of imprisoning and then deporting violent illegal foreigners.

A jury today found a man charged in connection with the Newark schoolyard slayings guilty of felony murder of three college-bound friends.

Jose Carranza, 32, of Newark was also found guilty of the robbery of three students, including a fourth who was the lone survivor of the attack. He was found not guilty of sexually assaulting the survivor, 19-year-old Natasha Aeriel.

Prosecutors say Carranza, one of six men accused in the killings, was there when they were killed.

He was accused of sexually assaulting one of the victims and then using a 12-inch machete to slash at her neck. The victim, 19-year-old Natasha Ariel, survived the attack.

Prosecutors said a fingerprint of Carranza’s was found on a still-cold bottle of beer at the murder scene. And Aeriel identified him in a series of photographs from her hospital bed.

Carranza, 32, is charged with murder, attempted murder, robbery and other offenses. Unlike his co-defendants, Carranza is also charged with the sexual assault of Aeriel.

Aeriel’s brother, Terrance Aeriel, 18, and her friends, Iofemi Hightower and Dashon Harvey, both 20, all died from gunshots to the head. They were all either attending or planning to attend Delaware State University that fall.

Two of the six accused – Rodolfo Godinez, 28, and Alexander Alfaro, 21 – were convicted by a jury and are serving life sentences. Shahid Baskerville and another defendant, Melvin Jovel, 22, pleaded guilty; Jovel is serving a life sentence and Baskerville accepted a 30-year sentence in exchange for testifying at Carranza’s trial and the trial of the remaining defendant, Gerardo Gomez, 19.

Baskerville, 20, testified during Carranza’s trial that the 32-year-old sexually assaulted Natasha Aeriel and slashed her neck with a 12-inch kitchen knife. In exchange for his testimony, Baskerville will likely be sentenced to 30 years in prison.

Prosecutors say all six defendants charged in the shootings have ties to a Central American gang known as MS-13 and they believe the murders were gang-related.

Carranza, an illegal immigrant from Peru, is currently serving an eight-year prison sentence in an unrelated aggravated assault case and was free on bail when the killings occurred.

Authorities say Carranza’s fingerprint, found on a 40-ounce bottle of Colt 45, places him at the scene of the murders. His attorney argued that a fingerprint alone does not indicate whether he participated in the attack.
Carranza’s sentencing will be held in April.