Ignorance of World Population Growth May Cause Bad Immigration Opinions

Rasmussen published an immigration poll last Thursday that had an interesting detail that may indicate a dangerous ignorance in the public: more than a third of US likely voters thought open borders would be fine as long as terrorists and criminals were kept out.

Do these persons being surveyed have any idea how many million that might be? There are billions of poor people on earth who would like a shot at “a better life” that the US might provide to them. But excessive immigration causes all sorts of problems in American society, like skyrocketing costs for education, falling wages and pressures on insufficient water supply, to name a few.

Interestingly, a 2012 Gallup poll found that 150 Million Adults Worldwide Would Migrate to the U.S., and those persons would come from cultures very different from our own:

Potential migrants who say they would like to move to the U.S. are most likely to come from populous countries such as China (22 million), Nigeria (15 million), India (10 million), Bangladesh (8 million), or Brazil (7 million).

In 2012, the world population was around 7.1 billion, and today there are more than 7.7 billion humans on earth. Transportation and communication have gotten easier in the intervening eight years, so that number was likely to increase.

In fact, a 2018 Gallup survey found that More Than 750 Million Worldwide Would Migrate If They Could, and the top choice for 158 million was the United States: 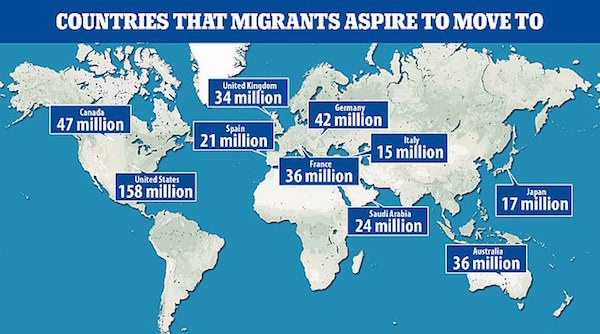 Anyway, the point overall is that the ignorance of the public concerning world population growth gives rise to some very unwise opinions about immigration. You can’t blame the average voter that much because the word “billion”—as in referring to the number of planetary residents—has disappeared from the immigration discussion. World population growth is a major push factor in the immigration equation, but it is overlooked for some reason.

Here are details of the Rasmussen poll:

Voters still favor tough border control and say it’s too easy to get in and stay in the United States illegally. But they also think illegal immigration is getting a little harder these days.

A new Rasmussen Reports national telephone and online survey shows that 52% of Likely U.S. Voters think it is better for the United States to tightly control who comes into the country. Thirty-six percent (36%) disagree and say it’s better for us to open our borders to anyone who wants to come here as long as they are not a terrorist or criminal. Twelve percent (12%) are not sure.