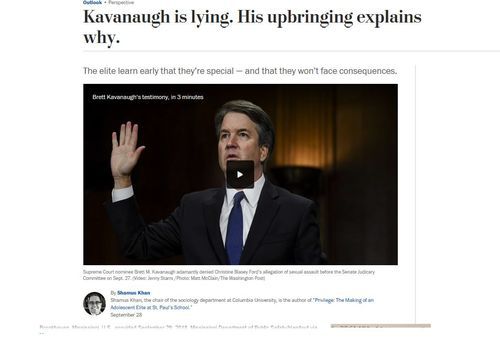 If Kavanaugh Can't be Trusted Because He Was Raised in Privilege, What About Dr. Prof. Ford?

Kavanaugh is lying. His upbringing explains why.

The elite learn early that they’re special — and that they won’t face consequences.

Shamus Khan, the chair of the sociology department at Columbia University, is the author of “Privilege: The Making of an Adolescent Elite at St. Paul’s School.”

His father, M. Akmal Khan, is a surgeon.[3] He has an older brother, Omar Khan, who has a PhD in Political Science from Oxford and is the director of the Runnymede Trust.[4]

Back to the WaPo opinion page:

Brett Kavanaugh is not telling the whole truth. … How could a man brought up in some of our nation’s most storied institutions — Georgetown Prep, Yale College, Yale Law School — dissemble with such ease? The answer lies in the privilege such institutions instill in their members, a privilege that suggests the rules that govern American society are for the common man, not the exceptional one.

The classical root of “privilege,” privus lex, means “private law.” The French aristocracy, for instance, was endowed with privileges, primarily exemption from taxation. Today’s equivalents are not aristocrats, yet they have both the sense and the experience that the rules don’t really apply to them and that they can act without much concern for the consequences. Elite schools like Georgetown Prep and Yale have long cultivated this sensibility in conscious and unconscious ways.

Okay, but how elite was the upbringing of Dr. Prof. Ms. Blasey Ford, Ph.D. versus that of Kavanaugh? Didn’t she have some of this poisonous elite privilege, too, that would make her untrustworthy? Her dad, for example, was president of Burning Tree Club, one of the more famous golf clubs in American political history. ESPN wrote in 2003:

During its salad days in the 1940s, ’50s and ’60s, Burning Tree reeked of political power. Presidents were extended honorary membership and many accepted: Franklin Roosevelt, Eisenhower, John F. Kennedy, Lyndon Johnson and later Richard Nixon, Gerald Ford and George Herbert Walker Bush (along with his impressive 11-handicap). Supreme Court Chief Justice Warren Burger played at Burning Tree, as did House Speaker Tip O’Neill. William Randolph Hearst was a member, too. Even after Edward R. Murrow was informed on the 10th tee that the Japanese had bombed Pearl Harbor, the veteran journalist played on.

But Burning Tree’s insistence on staying all male had brought it down far in the world by 2003:

Burning Tree in the new millennium has lost much of its political capital. Sitting presidents no longer play there. Senators John Warner (R-Va.) and Don Nickles (R-Okla.) are among those that pass for the club’s high-profile members, along with CBS newsman Robert Schieffer, Motion Picture Association chief Jack Valenti, television personality Bryant Gumbel and Supreme Court justice Antonin Scalia.

So the membership in 2003 was not exactly Ike and JFK anymore, but not too shabby either.

How elite is the Catholic Georgetown Prep versus Dr. Blasey Ford’s Holton Arms? One objective comparison is current tuition. Georgetown Prep’s day student tuition is $37,215, while Holton Arms’ base tuition starts at $42,975 for third graders, but expenses are higher for high school students.

So both seem fairly elite, but Prof. Dr. Ford is a woman and a Democrat, so that means the truth-warping rays of privilege bounce right off her incorruptible self.