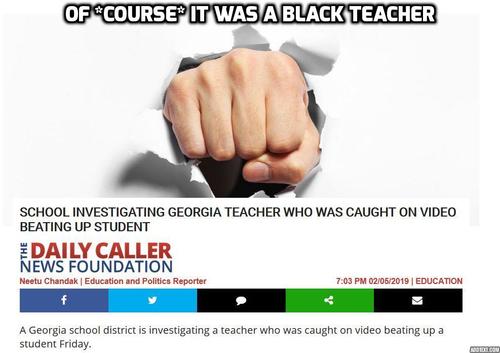 If A Black Teacher Punches A Black Student, Why Is The Story Illustrated With A White Fist?

This story from the Daily Caller is headed School Investigating Georgia Teacher Who Was Caught On Video Beating Up Student.

The video was originally posted on Instagram Friday and showed the student throwing classroom furniture and the teacher punching the student, WSB reported Tuesday. The student reportedly suffered a concussion, according to medical documents.

Yaquanda Lucas, the student’s legal guardian, said the student got upset because the football coach supervising the class was picking on him.

“He [the student] had his hat on and his stocking and he said the teacher said, ‘Quit cutting up your momma’s stockings and wearing them on your head,’ Lucas said. “He said he was picking on him, trying to make the class laugh, and that made him upset.”

Lucas added the district was aware of the student having mental health problems.

“I don’t excuse him throwing the chair, I don’t, Lucas said. “There’s a way to handle these kind of kids, and that’s not the way that you do it.”

Parents were not happy that the fight took time away from students learning.

“They need to start doing further background checks on teachers and getting in tune with what’s going on on the outside, too, because you don’t know who’s working in the schools,” parent Kapreshia Greenwood said, according to WSB. “They have to do better with being more teacher than friends.”

I don't know that the teacher was wrong to punch the student, considering the conditions at the school, and the fact that the kid was throwing furniture. What I really object to is the thing being illustrated with a white fist.

Obviously, if a white teacher was forced to punch out a violent, furniture-throwing black teen, it would be a much bigger deal.