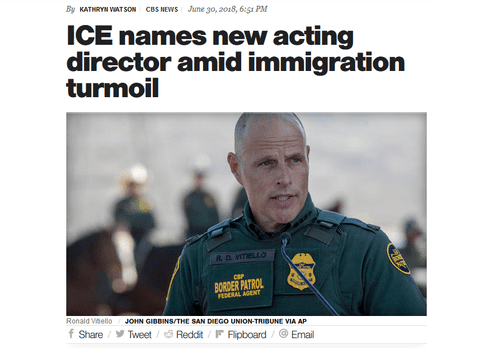 Ronald D. Vitiello, career Border Patrol Agent, someone who has always been in the 1896 Occupational Series, will now be supervising a group of conceited middle managers of the 1811 Occupational Series.  Oh boy, are heads exploding and are job searches being done right now.

A career border patrol agent who has become the de facto spokesman for Donald Trump’s elusive border wall is likely to be named the new head of Immigration and Customs Enforcement, or ICE. An announcement could come as soon as Friday.

Ronald D. Vitiello, the acting deputy commissioner of Customs and Border Protection, or CBP, is the top candidate to become director of ICE, several former and current Department of Homeland Security officials told Quartz. (ICE is part of DHS.) A DHS spokesman referred questions to the White House, which did not respond.

[A “Quiet And Thoughtful” Border Patrol Agent Has Been Tapped To Lead ICE, by Heather Timmons, Quartz, June 26, 2018]

Timmons tried to spin this as the second coming of the Great White Liberal Cop, but Timmons doesn't know what she's talking about.

Former and current colleagues describe a level-headed leader with a deep law enforcement background. “He’s more quiet and thoughtful than [outgoing director Thomas] Homan, but he’s still a cop,” a former DHS official said approvingly about Vitiello. During a contentious 2014 town hall meeting hosted by Republican Texas senator John Cornyn about building border fence in the Rio Grande area, Vitiello was able to placate irate residents, the official recalled, by explaining what the government wanted and why.

The selection of Vitiello has nothing to do with him being a soyboy on the down low, but it was a very deliberate slap in the face to the Backstabbing 19 at ICE SVU and a very loud and clear message that the former Customs dolts will be either forced to start doing immigration enforcement work or find new jobs.

A little inside baseball, in the Federal service there are many rivalries and many marks of prestige and egomania.  Especially so in Federal law enforcement.  The penultimate of Federal law enforcement is to be a Special Agent (SA), in the parlance of the Office of Personnel Management, a Criminal Investigator in the job series 1811.  Aside from the prestige of the title Special Agent, the job description is Criminal Investigator though, there is the matter of journeyman salary at the GS-13 level pay scale, as well as the infamous Law Enforcement Availability Pay (LEAP), which is a bonus of 25% of your base pay and locality pay.  That is supposed to include a minimum of 2 hours a day beyond the standard 8 hour day, but few actually work it.  Better yet is the take home fed sled, a free commute every day at government expense in a car with lights and siren.

Now that is something that Border Patrol Agents (BPA) never get, they don’t get LEAP, they don’t get GS-13 pay at the journeyman level.  They have Administratively Uncontrollable Overtime (AUO), which is the poor sister of LEAP, which actually has to be worked on a regular basis, which is what BPAs and Deportation Officers (DO) at ICE Enforcement and Removal Operations (ERO) get.

So, as one can imagine, appointing a BPA to supervise SAs is unprecedented and given the recent insubordination by the Dirty 19, a clear threat to the existence of ICE SVU, especially to the future employment prospects of the 19 resisters.  Even in the old day of the legacy Immigration and Naturalization Service (INS), BPAs never supervised SA, unless those were Border Patrol SAs in Anti-Smuggling Units.  While many a SA in the INS were once BPAs, they were promoted from the Patrol.  BPAs never supervised INS Special Agents.  This is true 4D chess by President Trump.

The Dirty 19 asked to be separated from ICE, they might just get what they wanted, but good and hard.  ICE SVU might soon be reorganized out of existence--plans are afoot I hear.

And a very good riddance to them.  I hear baby agents are being hired at the U.S. Postal Service Office of Inspector General.  The Backstabbing 19 might have to take a down grade from GS-15 or SES-1 to GS-7!