ICE’s Deportations Budget Has Increased, Yet Removals Have Plunged

Last week’s House Oversight Committee hearing shined a light on the refusal of the administration to deport dangerous criminals after their sentences are served. In fact, in 2015 ICE released 19,723 criminal illegal aliens, including 208 convicted of murder.

America’s Senator Jeff Sessions must have thought it was a good time to release more details about how poorly the government is doing its job of protecting the public from illegal alien criminals. The shrinking number of deportations is easy to grasp in the simple chart representing that last four years, plus the details behind the graph are included in an explanatory memo: 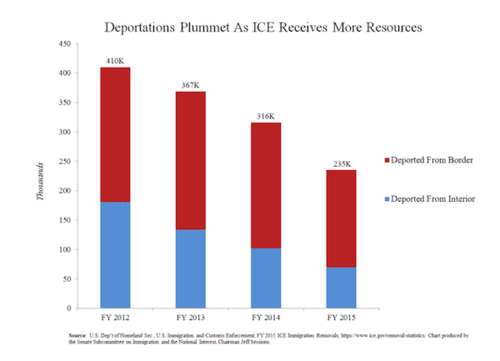 Background from the Subcommittee on Immigration and the National Interest:

This dramatic decline in deportations is the direct result of policies implemented by the Obama Administration to get around plain law passed by Congress. Indeed, the guise was to assert that the Government lacked the resources to deport more aliens. The former Director of ICE, John Morton, issued a memorandum in March of 2011, in which he outlined ICE’s purported enforcement “priorities,” and claimed that setting such priorities was necessary because ICE “only has resources to remove approximately 400,000 aliens per year, less than 4 percent of the estimated illegal alien population in the United States.” The Administration has used this line repeatedly, even citing it in testimony before the Senate Judiciary Committee. This statistic also appeared in a Memorandum Opinion written by the Department of Justice’s Office of Legal Counsel in late 2014 in its attempt to justify the Administration’s latest policies – stating that “DHS has explained that although there are approximately 11.3 million undocumented aliens in the country, it has the resources to remove fewer than 400,000 such aliens each year.”

Thus, while ICE’s detention and removal budget grew approximately 25 percent from FY 2012 to FY 2015, the total number of aliens it deported from the United States decreased by nearly 43 percent.