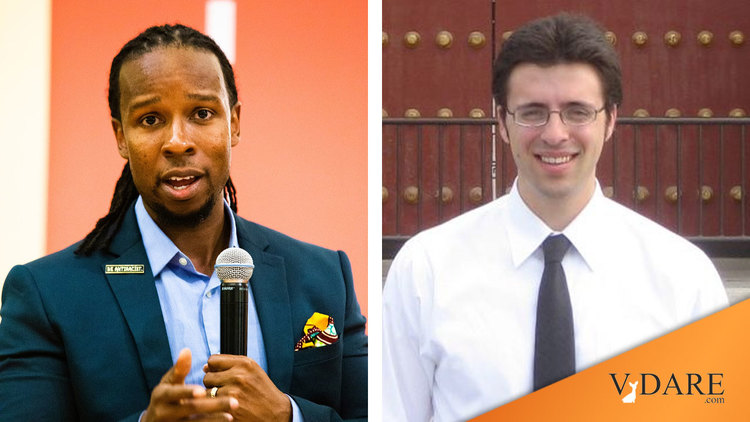 … IBRAM X. KENDI: Well, what it means to be antiracist is to first recognize that we live in a society of racial inequities, from wealth to health to criminal justice to education, and to recognize that we’ve been taught that, let’s say, Black people are disproportionately impoverished or incarcerated because there’s something wrong with Black people behaviorally or culturally. And to be antiracist is to say, no, the racial groups, not individuals, but the racial groups are equal, that there’s no group that is inferior or superior. And so therefore, the cause of a disparity or an inequity must be policies or practices that we see or don’t see. And to be antiracist is to identify those and challenge them and to try to rebuild a nation that — policies and practices that create equity and justice for all people. …

In other words, the essence of antiracism is to make blacks as rich as whites by making whites as poor as blacks.

And then the other side of this question becomes, what is the cause of crime? And I think that’s one of the fundamental debates we’ve been having as Americans, really, from the beginning of this country. And some people have believed that the cause of crime, particularly the cause of crime in Black neighborhoods, are those Black people. In other words, it’s their culture, it’s their behavior. At a time, it was the result of we had this genetic predisposition to violence and criminality. And if that’s the case, then it makes sense that you need police, well-funded police, who can basically control those animals because they’re the cause of the crime.

But what if something else is happening? What if there were higher levels of poverty and unemployment and dense poverty and unemployment. Let’s say that’s a cause of the crime. Let’s say the cause of the crime is the amount of guns that are circulating throughout this nation. What if the cause is the lack of mental health services? What if the cause is the lack of resources for local schools since they’re so based on property taxes? And I think in order for us to talk about defunding the police and even whether we should pursue that, we can’t divorce that from the argument over the source of the crime itself.

Now obviously, police unions are primarily making the case that crime levels are directly relative to the amount of funding police receive and the number of police receives. You have more police, more funding for police, there’s less crime. There’s no data that supports that, but that’s what they’re advocating, and that’s what they’re making people to believe, that if you reduce funding for the police, crime is going to grow. But there’s no evidence that supports that. And that’s actually not what we found. We don’t have evidence that supports the rising levels of homicides over the last year has been because the police have been defunded.

… IBRAM X. KENDI: No, you’re not. And I guess one of the things that’s happened — and I write about this in my work. One of the things that some people would say is, they wouldn’t say, let’s say, Black people are inferior genetically. They wouldn’t say that Black people are inferior culturally. But they would say, what I sort of call in my work, the oppression inferiority thesis, which is that Black people are subjected to oppression, and that then results in behaviors that are deficient. And those behaviors include, let’s say, violent behaviors or other types of behaviors. And it’s a very thin line between saying that there’s no such thing as a dangerous unemployed neighborhood and there’s a dangerous Black neighborhood because of unemployment. Those are two different things, and I think I wanted to really push to ensure we’re understanding these as dangerous unemployed neighborhoods. That the race of the people really don’t matter in this sense in the way that the poverty does.

Latinos are roughly as poor as blacks, but the black murder rate is several times that of the Latino murder rate.

EZRA KLEIN: … And I’ll give the example here of open borders, which is a policy that undoubtedly, like, you look at the economics, almost nothing we could possibly do would be better for reducing global inequality. But I think that if Joe Biden came out tomorrow and said, I’m for open borders, the practical effect would not be open borders but would be Donald Trump is president again in 2025. How do you think about those questions of political strategy and its interplay here?

IBRAM X. KENDI: See, Ezra, that’s why I don’t like us talking because you’re always asking me these incredibly difficult questions. In all seriousness, I think, in that case, we really would have to think very deeply about, how do we convey and promote this policy in a way that is not going to then lead to this reactionary sort of response.

Ibram goes on at some length but never quite tells Ezra explicitly that he doesn’t give a damn about a bunch of Mexican foreigners getting in due to Ezra’s obsession with Open Borders.

And the reason why that’s been so incredible to me is because it should be widely believed that the phrase, antiracist is code for antiwhite, was a white supremacist talking point for years. I think that’s what’s also been striking to me, that you can have such prominent white supremacist thoughts dominating the Republican Party that even Donald Trump himself isn’t necessarily driving. …

IBRAM X. KENDI: So let me just say one at a principle level and one at a policy level. I think the principle — and this becomes a principle within the courts, which, of course, is outlandish, but you asked. That instead of the current principle that was affirmed recently by the Supreme Court decision in Arizona voting law, that pretty much in order to prove that a policy is, let’s say, racist we have to show intent, instead, if a policy had disparate impact, then it could be defined as a policy that potentially needs to be eradicated and presumably is even unconstitutional or even is racist towards a particular group.

Has Kendi not heard of the 49 years of disparate impact law since Griggs vs. Duke Power in 1972?

To complicate it further, as we talked about earlier, certain policies can have disparate impact for different groups. But if it’s a policy that is, let’s say, primarily making it harder for Black, brown, and indigenous people to vote, and it’s not as hard for white Americans, then we would know that that’s a policy that the court should be striking down. I think at a policy level, to me, the two data points that demonstrate the cumulative effect of racist policies and practices and even ideas and violence and abuse are racial health disparities, but more specifically the life expectancy gap and the racial wealth gap. And I don’t know of a single policy in which we can eliminate the life expectancy gap, but I do know of a single policy that has the potential to eliminate, if targeted and implemented correctly, has the capacity to eliminate the racial wealth gap, and that’s reparations.

In other words, to be antiracist is to take white wealth at gunpoint under color of law and give it to blacks.