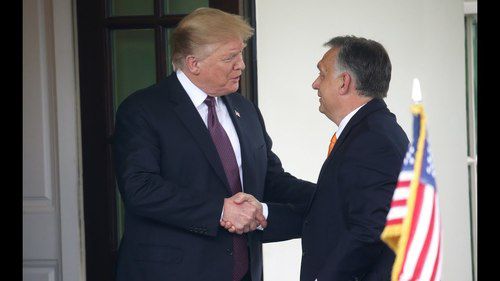 President-elect Trump invited Hungarian Prime Minister Victor Orban for a White House visit back in 2016, and the meeting finally happened on Monday.

The PBS Newshour report was typical of the liberal press with its snooty characterization of Orban. NPR called him “Hungary’s authoritarian prime minister” and USA Today thought it was cute to quote critics’ nickname “Viktator” even though he has been elected fair and square more than once.

One suspects that Oban’s tough enforcement against illegal immigration is the real source of media disapproval. The press loves the fake generosity of open borders that harm only people far away from the nation’s elite newsrooms.

The PBS report discussed the immigration issue, though without mentioning that the oppressive Islamic Ottoman Empire controlled part of medieval Hungary for over a century, so Hungarians are not kindly disposed toward muslims like the thousands of diverse refugees who arrived a few years back. Memories are long in Eastern Europe.

Orban has roiled Europe with his populism, his restrictions on immigration, and anti-democratic moves in order to consolidate power in Hungary.

William Brangham has the story.

WILLIAM BRANGHAM: It was Viktor Orban’s first visit to the White House in 20 years, and he found a like-minded leader in President Trump.

DONALD TRUMP: Probably like me, a little bit controversial, but that’s OK. That’s OK. You have done a good job. And you have kept your country safe.

VIKTOR ORBAN: And I would like to express that we are proud to stand together with the United States on fighting against illegal migration, on terrorism, and to protect and help the Christian communities all around the world.

BRANGHAM: In the 1990s, when he visited President Clinton, Orban was seen by many as a democratic reformer, helping steer his country out of the Soviet era. He returned to power in 2010, but, this time, as a right-wing populist and nationalist.

ORBAN (through translator): European culture based on Christian values must be given primacy on the European continent. Europe’s borders must be protected against the invasion of migrants.

BRANGHAM: Where President Trump has called for a wall at the U.S.-Mexico border…

ORBAN (through translator): The biggest danger of all is the immigrants in their millions who are threatening us from the south. That’s the truth. We built the fence. We defended the southern border.

BRANGHAM: While lines lengthened at the border, and pleas for help grew, grants of asylum in Hungary dropped drastically. Many of the refugees already in Hungary were deported to Serbia.

MOHAMMAD ARAB: They told us that you need to leave Hungary immediately, right now, or we will deport you back to Afghanistan. The police officers are really bad. They treat us like we’re not humans, like animals.

BRANGHAM: Last year, Janos Lazar, then a top official in Orban’s Cabinet, made this video in Vienna, Austria, about the growing Muslim community there.

JANOS LAZAR (through translator): The white Christian Austrians moved out, and the immigrants took control of this neighborhood. If Hungarians let them in and let them live in our cities, there will be a higher crime rate, impoverishment, filth.

Orban’s increased crackdown on the Hungarian media has also created strain with the E.U. The Committee to Protect Journalists warns that Orban has — quote — “crippled the independent press” and is a — quote — “threat to the E.U. as an institution.”

But there was no such criticism in the Oval Office today, as President Trump pressed to loosen Hungary’s reliance on Russia and China, and build closer ties with the U.S.

For more on what this newfound alliance means for Hungary and for Europe more broadly, we turn to Charles Kupchan. He was the senior director for European affairs on the National Security Council staff during the Obama administration. He is now a senior fellow at the Council on Foreign Relations and a professor at Georgetown University.

Welcome back to the “NewsHour.”

CHARLES KUPCHAN: Good to be with you.

BRANGHAM: For people who have not been following Viktor Orban’s career or really appreciate where he sits in the orbit of European politics, tell us a little bit more about him.

KUPCHAN: Well, as your piece said, he starts off as a disheveled liberal post-communist progressive.

He has one bite at the apple as prime minister from ’98 to 2002. And then he comes back in 2010. And he’s been there ever since. And he essentially tracks from the left to the right to the further right over the course of his political career, and, in many respects, is a person that’s ahead of his time, in the sense that he became anti-immigrant, anti-Europe, close down the borders, take over the media, compromise the independence of the judiciary, well before it became mainstream.

You now see it happening in Poland, in Italy. The far right is gaining ground in Germany. It’s a widespread phenomenon. He was in many respects the person who blazed that path.

BRANGHAM: Former Trump senior adviser Steve Bannon once referred to Viktor Orban as Trump before for Trump. Is that an accurate characterization of him?

KUPCHAN: There’s no question that there is an ideological affinity between Trump and Orban.

There is, I think, an effort to create what you might call an illiberal alliance, in which Trump sides with Orban, Salvini, the head of the League in Italy, Kaczynski, the head of what’s called Law and Justice Party in Poland, Alternatives for Germany in Germany, the National Rally in France.

They’re trying to create a political movement that pushes democratic politics to the right and in the anti-immigrant direction. I don’t think it’s any accident that this meeting today occurred less than two weeks before votes for the European Parliament.

It’s a bellwether election. No question that the far right, the anti-E.U., the anti-immigrant forces will gain ground. The question is, how much ground will they gain? How much influence will they wield in the new Parliament?

BRANGHAM: Given that, what impact does Viktor Orban sitting there and getting this warm embrace from President Donald Trump actually mean for our bond and the E.U.?

KUPCHAN: No question that it’s a big bump for Orban. He made it into the Oval Office.

Trump, to some extent, is letting him out of the penalty box, because he’s been shunned for a long time. In fact, the E.U. has been going forward with what’s called Article 7, explicit legal sanctions against Hungary for its anti-democratic behavior.

So, this is basically letting him back in at the seat with the big boys. Second thing is, I think this will help populists across Europe, because they will look at Orban and they will say, hey, this guy has momentum. Let’s go to the polls.

The one thing that I would say as a caveat is, a lot of Europeans aren’t going to like this meeting. Some of them may go to the polls later this month and vote for centrist parties precisely because they don’t like Trump, they don’t like the fact that he’s interfering in European politics. So it’s difficult to say exactly how this will play.

KUPCHAN: Well, I think the main impact of this meeting is this symbolic one that we have been talking about, but there will be a traditional component to this in the meeting today.

One of it has to do with China. The Chinese are building Belt and Road. They are investing in Hungary. Hungary is considering bring in Huawei, the large Chinese telecom company, to build its 5G network. The United States doesn’t like that because of security concerns.

Orban has been very close to Putin. He has invited Putin to Budapest on several occasions. Trump probably is OK with that, because he also likes Putin. But I think in many respects the Trump administration may see it going a little bit too far. He, for example, has stood in the way of NATO cooperation with Ukraine. The Trump administration has been supporting Ukraine.

There will also, I think, be as part of the agenda a discussion of energy in the region, the Central European energy corridor. And Trump has also wanted to sell arms to Hungary, get rid of their Soviet arsenal. So I’m guessing that, earlier today, he pushed him on that front as well.