Former federal prosecutor Andrew McCarthy appeared at the National Press Club on Wednesday and delivered nearly an hour of prepared remarks with a detailed critique of Islamist penetration of the highest levels of Washington. He spoke in support of the five members of Congress who asked for inspectors general of several agencies to investigate the threat, but were attacked for their concerns.

McCarthy learned about the threat of hostile Islam during his prosecution of the blind sheik Omar Abdel Rahman (and 11 others) for the 1993 jihadist bombing of the World Trade Center. He has since written two books on the Islam threat to America, the more recent being “The Grand Jihad: How Islam and the Left Sabotage America”.

A central figure in the national security controversy has been Huma Abedin (the daughter of immigrants, pictured below), an aide to Secretary of State Hillary Clinton since her First Lady days. Abedin’s close family is a big player in Muslim Brotherhood affairs now, yet few in diversity-befuddled Washington are brave enough to question her influence. In a 2011 puff piece (Huma Abedin, Rep. Anthony Weiner’s unflappable wife), the Washington Post said she “advises on politics and policy, especially the Middle East.”

McCarthy took pains to say that just the appearance of a conflict of interest was a disqualifier in background checks a few years ago, but that’s no longer the case, apparently. That fact alone should be a wake-up call. 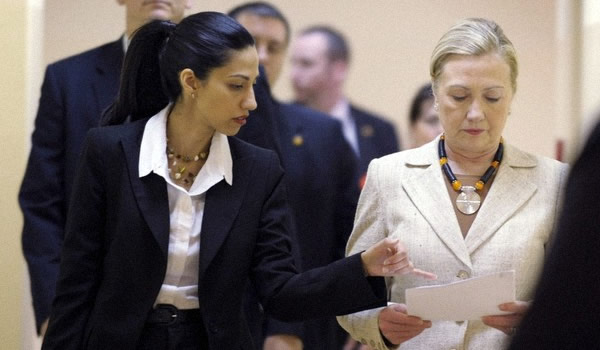 McCarthy’s Press Club presentation may be watched on the YouTube video below (also via C-SPAN). The speech is dense with facts, such that you might want to follow the written text: Our Government and the Muslim Brotherhood — My Speech in Washington.

Of all the important points elucidated in the presentation, McCarthy’s list of ways the State Department has bent to the jihadist Muslim Brotherhood is particularly disturbing:

Still, it is Congress’s responsibility to scrutinize executive branch policy, especially when the policy choices endanger the nation. Let’s consider just some of those policy choices in the last three-and-a-half years. Since 2009, the Obama administration has abandoned the federal government’s prior policy against dealing directly and formally with the Muslim Brotherhood. The State Department has not only been supportive of this dramatic shift; it has embraced a number of Muslim Brotherhood positions that undermine both American constitutional rights and our alliance with Israel. To name just a few manifestations of this policy sea change:

? The State Department has an emissary in Egypt who trains operatives of the Brotherhood and other Islamist organizations in democracy procedures. We’re helping them get elected.

? The State Department announced that the Obama administration would be “satisfied” with the election of a Muslim Brotherhood–dominated government in Egypt.

? The State Department has collaborated with the Organization of Islamic Cooperation, a bloc of governments heavily influenced by the Brotherhood, in seeking to restrict American free-speech rights in deference to sharia prohibitions against examination and negative criticism of Islam.

? The State Department has excluded Israel, the world’s leading target of terrorism, from its “Global Counterterrorism Forum,” a group that brings the United States together with several Islamist governments, prominently including its co-chair, Turkey. By the way, the Erdogan regime in Turkey now finances the terrorist organization Hamas, which is the Muslim Brotherhood’s Palestinian branch. At the forum’s kickoff, Secretary Clinton decried various terrorist attacks and terrorist groups; but she did not mention Hamas or attacks against Israel. Transparently, this was in deference to the Islamist governments the administration has chosen to partner with — to the exclusion of Israel. Those government’s adhere to the Muslim Brotherhood’s position that Hamas is not a terrorist organization and that attacks against Israel are not terrorism.

? The State Department and the Obama administration waived congressional restrictions in order to transfer about $1.5 billion dollars in aid to Egypt after the Muslim Brotherhood’s victory in the parliamentary elections.

? The State Department and the Obama administration waived congressional restrictions in order to transfer millions of dollars in aid to the Palestinian territories notwithstanding that Gaza is ruled by the Hamas, which is a designated terrorist organization under American law — meaning that to provide it with material support is a serious federal crime.

? The State Department and the administration recently hosted a contingent from Egypt’s newly elected parliament that included not only Muslim Brotherhood members but a member of the Islamic Group (Gama’at al Islamia). The Islamic Group is the jihadist organization headed by the Blind Sheikh (Omar Abdel Rahman), who is serving a life sentence for his leading role in a terrorist campaign against the United States in the early Nineties. Like Hamas, the Islamic Group is a designated as a terrorist organization to which it is illegal to provide material support.

? On a just-completed trip to Egypt, Secretary Clinton pressured the ruling military junta to hand over power to the newly elected parliament, which is dominated by the Muslim Brotherhood, and to the newly elected president, Mohamed Morsi, who is a top Brotherhood official. Secretary Clinton later met with Morsi, who has also been extended the honor of an invitation to visit the White House in September.

All this, despite the Muslim Brotherhood’s extensive record of hostility toward the United States, and despite the fact that Morsi, in his first public statement after being elected president, announced that one of his top priorities is to pressure the United States for the release of the Blind Sheikh.