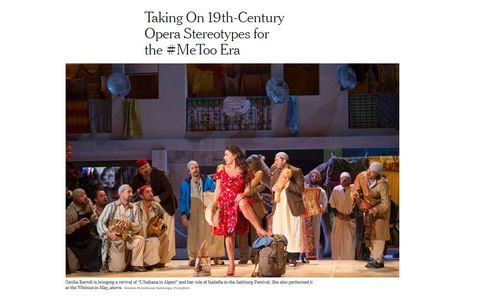 How to Current Year-Proof Rossini's Comic Opera About White Slavery

From the New York Times, an article explaining how an upcoming Rossini opera, “L’Italiana in Algeri,” being put on by superstar mezzo-soprano Cecilia Bartoli at the Salzburg Festival for Very Rich Music Lovers is being Current Year-Proofed:

Taking On 19th-Century Opera Stereotypes for the #MeToo Era

What happens when a powerful man makes moves on a strong, independent woman who has no intention of accepting his advances?

And how are things further complicated if he is Middle Eastern and she is Western and their cultures fundamentally clash?

Oh, well, that’s kind of … different. One doesn’t want to be insensitive, does one? Maybe she should just lie back and think of the EU?

These are some of the basic narrative elements of Gioachino Rossini’s 1813 comedic opera “L’Italiana in Algeri” (“The Italian Girl in Algiers”), which tells the story of Mustafa, a Turkish bey, or governor, who wants to jettison his wife, Elvira, and who complains that Muslim women are too ingratiating and submissive. He seeks the exciting temperament and sexual prowess of an Italian woman, he says, and tasks his assistant, Haly, with finding him one, on pain of death, within six days.

As operatic good fortune might have it, Haly stumbles upon Isabella, a victim of a recent shipwreck. She is searching for her fiancé, Lindoro, who was captured by pirates and who now, by coincidence, is a servant in Mustafa’s court.

The kidnapping into sex slavery of vast numbers of European women by Muslims would have completely disappeared down the Memory Hole if not for all the comic operas on the subject, such as Mozart’s breezy Abduction from the Seraglio.

In theory, it would seem like there would be room for an angry feminist take on how white slavery was not a joke to the hundreds of thousands of European women kidnapped into harems. Why are there more comic than tragic operas on this subject?

But the rest of the article makes clear that the headline’s promise is not being fulfilled, due to multiculturalism.

For a modern audience, this story treads on territory that is quite sensitive, sociologically speaking. There are sexual politics, colonial implications and a clash of Eastern and Western values. Not to mention harems and eunuchs and Ottoman rulers, which don’t seem so relevant today. …

But how to handle such an opera in a #MeToo context and in an age of tense East-West affairs? Mr. Leiser and Mr. Caurier, who have collaborated since 1983, were aware of the potential pitfalls of trying to take on such a work at this political moment, Mr. Leiser said.

“The last thing I wanted was Western elite people going to the Salzburg opera and having a lot of fun seeing how ‘stupid’ the Arabs are,” Mr. Leiser said in an interview. “You must be very politically aware that we are not laughing about, but we are laughing with.”

He said they attempted to navigate the work by trying to be perfectly clear about the political messages they were sending.

“What I believe is that, according to the political context you’re in, you must be very aware of the references you’re using and how you present human suffering or human madness, whether it’s a tragedy or a comedic opera,” he said. “You must be very careful about whose side you’re on when you deal with characters in an opera.”…

“The piece at its core, in a certain way, is a very Western take on Islamic culture, and normally Mustafa is portrayed as just stupid and ugly and the Italians are clever and very heroic,” Mr. Leiser said. “That was something I was not interested in at all. We had to find another story line to keep the genius of Rossini and the music and the libretto, and keep it as a real comedy, because it’s important to laugh. But comedy is serious business, and you must know what you are laughing about.”

Rather than altering the libretto, which Mr. Leiser said would be “cheating,” he engaged in many long conversations with Ms. Bartoli and Mr. Caurier to shift the interpretation. They decided to change Mustafa’s status from an Ottoman bey to a kind of local gangster who smuggles electronics at the port of modern-day Algiers, because they “felt that his behavior shouldn’t be generalized as Muslim behavior.” …

Mr. Leiser said that they had to be very conscientious to make sure the jokes worked and that they didn’t send the wrong kinds of message.

So, it sounds like the changes don’t have anything to do with #MeToo and everything to do with #PleaseDoNotKillUsISISPlease. Not that there aren’t prudent reasons for trying hard not to offend angry Muslim extremists … But it is another data point about where white women fall on the Intersectional Pokemon Points totem pole.