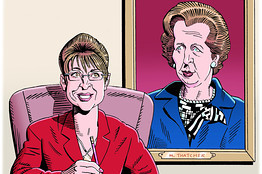 John O'Sullivan has an interesting column in the Wall Street Journal comparing Sarah Palin to Margaret Thatcher, for whom he worked. He points out that:

Inevitably, Lloyd Bentsen's famous put-down of Dan Quayle in the 1988 vice-presidential debate is resurrected, such as by Paul Waugh (in the London Evening Standard) and Marie Cocco (in the Washington Post): "Newsflash! Governor, You're No Maggie Thatcher," sneered Mr. Waugh. Added Ms. Coco, "now we know Sarah Palin is no Margaret Thatcher — and no Dan Quayle either!"

Things like that change your mind about a girl. But they also take time, during which she had to turn her instinctive beliefs into intellectually coherent policies against opposition inside and outside her own party. Like Mrs. Palin this year, Mrs. Thatcher knew there were serious gaps in her knowledge, especially of foreign affairs. She recruited experts who shared her general outlook (such as Robert Conquest and Hugh Thomas) to tutor her on these things. Even so she often seemed very alone in the Tory high command.

As a parliamentary sketch writer for the Daily Telegraph (and a not very repressed suburbanite), I watched Mrs. Thatcher's progress as opposition leader. She had been a good performer in less exalted positions. But initially she faltered. Against the smooth, condescending Prime Minister James Callaghan in particular she had a hard time. In contrast to his chuckling baritone she sounded shrill when she attacked. But she lowered her tone (vocally not morally), took lessons in presentation from (among others) Laurence Olivier, and prepared diligently for every debate and Question Time.

I can still recall her breakthrough performance in a July 1977 debate on the Labour government's collapsing economy. She dominated the House of Commons so wittily that the next day the Daily Mail's acerbic correspondent, Andrew Alexander, began his report: "If Mrs. Thatcher were a racehorse, she would have been tested for drugs yesterday." She was now on the way to becoming the world-historical figure who today is the gold standard of conservative statesmanship.

This explains much of my lack of interest in the ongoing "How smart is Sarah Palin?" brouhaha. She's not a plausible Presidential candidate until she wins re-election in 2010. Then, if Obama is in trouble, she could make a dash for 2012, or focus on 2016, when she'll be 52. If she skips 2012 and a Republican wins two terms, she could run in 2020 when she's 56.

What all this means is that she has the time to put herself through a lengthy educational process similar to the one Mrs. Thatcher undertook. If she succeeds in it, then she's Presidential Timber. If she doesn't, she's not. In either case, I'm not going to spend a lot of time worrying at present about whether she is going to succeed or not. It's Mrs. Palin's career, not mine.

Another similarity between Mrs. Thatcher and Mrs. Palin is that when Miss Roberts, then in her mid-20s, first showed up on the political scene by putting up good shows in losing runs for safe Labour seats in the 1950 and 1951 elections, she was the best looking woman in politics. I've stumbled across recollections by conservative-leaning English gentlemen of a certain age—Alec Guinness, David Lean, and Kingsley Amis—of what a crush they had on the future Mrs. Thatcher. The thing to keep in mind about her is that she is extremely English looking, with the kind of looks that are rarely seen in America, so Americans can't see what 1950s English saw in her.

On the other hand, Thatcher had two major career advantages over Palin: a rich husband and fewer children. Mrs. Thatcher told my wife how lucky she was to have had fraternal twins so she could have a boy and a girl all at once and then get back to her career.