How Did The Diveroli Family Qualify For "Minority Ownership" Preferences? 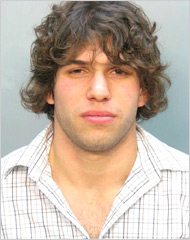 fraim E. Diveroli, whose AEY firm just had its $200-$300 million contract with the U.S. government yanked, I noticed that a company called Worldwide Tactical, managed by Efraim's father Michael Diveroli, operates out of the same address in Miami Beach and has the same fax number. What caught my eye was this line on FedVendor.com form for Michael Diveroli's Worldwide Tactical.

I explained how something like this could happen in a VDARE.com article "What's Spanish for Chutzpah?" which explains how a Polish-born entrepreneur named Liberman got himself declared Hispanic for the purposes of getting tax breaks on buying radio stations. See, the Libermans got tossed out of Spain in 1492, which makes them Hispanics.

But "Diveroli" appears to be an Italian Jewish name. Maybe they got themselves declared "Latinos" because their ancestors spoke some Latin 2000 years ago? Who knows?