Twice-deported Mexican Johoan Rodriguez was found guilty of intoxication manslaughter on Friday in a Houston courtroom for killing Officer Kevin Will, 38, last May.

The officer’s widow tried to make a victim’s statement about her loss, including how her new baby Kevin Jr. never got to meet his father, but she couldn’t make it through, and her mother had to finish reading how the preventable death had ripped the family apart.

Below, Officer Kevin Will (left) was run down and killed by a drunk-driving illegal alien gangster, Johoan Rodriguez, shown at the time of his arrest. 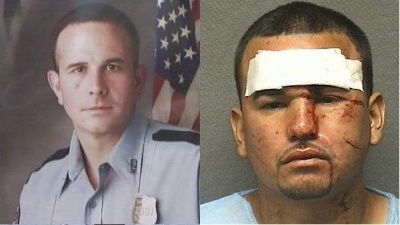 Rodriguez is a poster boy for the sort of criminal alien that Houston should want to punish harshly and convince not to return, but instead, the city’s permissive sanctuary policy has made it a relatively safe place for foreign criminals to reside. Rodriguez admitted to being a member of the MS-13 gang. At the time of the incident that killed the officer, Rodriguez was seriously drunk (blood alcohol level at .238, three times the legal limit), and had a packet of cocaine in his pocket. His car was moving at 90 mph when it blew through a police barricade and struck and killed Officer Will, who was standing on the roadside investigating an accident.

HOUSTON—Johoan Rodriguez was sentenced to 55 years in prison Friday for the intoxication manslaughter death of Houston police officer Kevin Will.

Rodriguez had pleaded guilty in the case before the trial began. Prosecutors were hoping for a life sentence, but they believe, along with the officer’s family, that they did get justice.

Rodriguez had a blood-alcohol level nearly three times the legal limit when he raced through a police roadblock on the North Loop near Yale at an estimated 90 miles an hour on May 29, 2011.

Officer Will and other HPD officers were investigating a motorcycle crash and had closed the highway. Police dashcam video played for the jury during the one-week trial, and again during closing arguments, shows Rodriguez’s Volkswagen hitting Kevin Will—severing both legs and killing him instantly.

Officer Will left behind a wife and three children, including a baby born a short time after his death.

It was an emotional case for everyone involved.

“I’m having nightmares….and the judge said it will go away,” said juror Pat Pinney.

The officer’s widow Alisha Will attempted to speak after the sentence was announced.

“Kevin was an amazing father to my kids and I loved him very much,” said Will. Her mother continued reading for her when she couldn’t make it through her final statement to the man who killed her husband.

“I was six months pregnant when you killed my husband. My son Kevin, Jr. will never meet his father because of you.”

And an hour later, dressed in blue t-shirts with the words “heroes live forever” written on them, fellow officers spoke for her and for their fallen brother.

“I do believe that it’s just. I do think that we got justice,” said police officer Don Egdorf.

Defense attorneys asked the jury to take the suspect’s life history and his lack of a criminal record into account, and asked that he only be given 15 to 25 years in prison.

Rodriguez was brought to the U.S. illegally by his parents when he was 8 years old. His father, Juan, disappeared under mysterious circumstances when Rodriguez was 11 and was found murdered a few months later. Rodriguez was raised in Houston and went to Houston-area schools, until he dropped out of high school in the 11th grade. He has been deported from the U.S. twice.

During closing arguments, when prosecutors said none of this would have happened if Rodriguez had just stayed deported, Rodriguez sobbed and shouted that he just wanted to get back to the U.S. to see his sick grandfather.

Called as a character witness, the defendant’s mother, Maria Rodriguez, pleaded for mercy.

“I beg you for my son’s life. I know he made a mistake. But he is good,” she said. “He would have never wanted to do this. It was an accident.”

“He told you through his guilty verdict ‘I did it. I’m guilty’ and you heard him apologize the first chance he had. That is worth something in the face of life in prison,” said defense attorney Rick DeToto